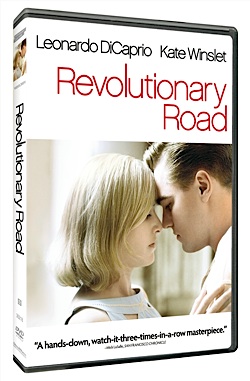 America had won World War II, becoming the first true Super Power of the 20th Century. But with it came a price and that was a desperate desire among the populace to preserve their freedom through an amazing sense of conformity. Being different was seen as being un-American and you were likely to be accused of being a Communist, which had replaced being a Nazi as the vilest kind of person.

The spread of television and the broadcaster’s desire to present a harmonious vision of an ideal lifestyle led to a sameness from coast to coast that the country had never experienced before. Nor had the country really seen the rise of suburbia as people commuted by the tens of thousands to jobs in the nearby city, which also had it s affect on society.

Against all of this, Richard Yates wrote the 1961 novel Revolutionary Road

that was the first work of fiction to examine the cost this conformity exact from the soul of the individual and society as a while. The acclaimed work had resisted being adapted into film until Kate Winslet campaigned for nearly four years to get the film made by her husband, director Sam Mendes.

The resulting production, coming out Tuesday on DVD, quickly became a critics’ darling, garnering three Academy Award nominations and four Golden Globe nominations. Starring Winslet and Leonardo DiCaprio, it told of the Wheelers and the day they woke up to declare they didn’t want to be trapped by the conformity that was suffocating them.

By 1955, they were married with two children, living in Connecticut while Frank commuted to Manhattan to work at the same business machine firm as his father while April felt suffocated in her perky home. She seized on the notion they should follow Frank’s youthful dream of living in Paris so he could figure out what he really wanted to do with his life. She had the then-radical notion of working to support him while he figured it out and her fervor was such that he initially signed on. As the summer progressed, you could watch his cold feet developing as he turned 30 and appeared to lack the courage to act.

The film does a nice job of showing Frank’s isolation despite being surrounded by an army of men in their gray flannel suits contrasted with April’s loneliness in the house. You see them fiercely trying to maintain their marriage while they each drifted in different directions. When April revealed her pregnancy, it became the moment they seemed to permanently part.

The film nicely realizes 1950s suburbia, from the kinds of appetizers served to company, to the uniformity of business attire in the office. What it fails to do is show them in the greater context of their life. The two children are mere decorations with neither parent apparently having any relationship with them. April seems to have a mere two friends despite her participation, no doubt with the children’s peers and their parents. There’s no real sense of their social circle; instead, we’re told they were a special couple but we’re never shown what that means.

As a result, we’re told a lot but not shown enough to understand how they came together and then violently pulled apart. The dialogue is well done by Justin Haythe and delivered by top performers but ultimately, I’m left with an incomplete portrait. The stars are ably supported with the familiar likes of Jay O. Sanders, Dylan Baker, and Kathy Bates.

Nearly stealing the film out from under them is Michael Shannon’s performance as John Givings, a mentally disturbed adult who acts as the vocal conscience for April and Frank. The madman is the only one to see the hypocrisy of their world which is a metaphor that could have been explored further.

The film needed more to win me over but it’s a riveting drama despite its flaws. The DVD comes complete with a handful of deleted scenes, some of which expanded on the themes but reveal nothing new. The 30 minute Making Of featurette gives lip service to the themes but spends a lot of time on the costuming and set design, all of which contributed to the feeling of isolation.

There’s never a hint that while the couple battled the world they made for themselves, there were others slowly evolving beyond the constraints of the expected. Rock and Roll, the Beat Generation, and the civil rights movement were all bubbling to the surface at the time of the film, and the destination from [[[Revolutionary Road]]] could have been found had they worked together to find it.