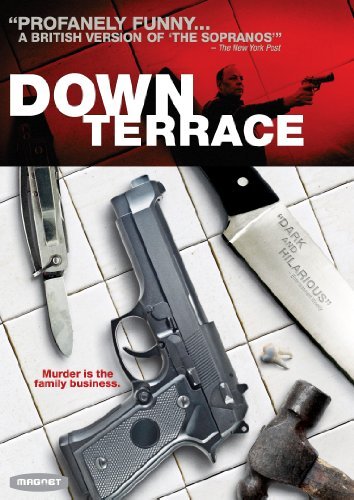 You have to admire filmmakers who scrape together the money to produce a feature film with a unique point of view. The films go largely unnoticed, play on the festival circuit and if lucky, land a cable or home video deal, widening the exposure. As a result, some interesting gems surface but it’s always hit or miss.

That phrase also applies to Ben Wheatley’s [[[Down Terrace]]], a film shot over eight days in 2009 and recently released on DVD by Magnolia Home Entertainment. Wheatley is a Brit who cut his teeth on second unit, advertising and webisodes, all of which was a good training ground. When he finally managed his first feature, he received good notices, even winning the Next Wave prize at Fantastic Fest in Austin and Best UK Feature at London’s Raindance.

This is a claustrophobic crime drama that has been described as a low budget version of [[[The Sopranos]]] but this is smaller, darker, and grimmer. Starring Wheatley’s frequent collaborators, Robert and Robin Hill as a father and son, they are small-time criminals who just were acquitted of a crime. Both want revenge against the rat who sold them out and that forms the story’s spine, but it’s a thin spine since we’re distracted by other familial complications.

This is a working class crime family drama told in chapters named after the days of the week. The dialogue is sparse and feels largely improvised as bickering betrays character while the film’s low budget leads to consistent audio issues. You’d think it would have worked better considering the majority of this mostly engaging film is set in the cramped Brighton house. The characters come and go, and largely feel real while at the same time also feel not fully thought out.

William and Karl, father and son, seek the snitch while mom Maggie (Julia Deakin) seems to while away the day, smoking and staring. She’s the least interesting one in the mix but also the one who might have the most interesting things to say. Instead, she’s mute while William rages and summons Pringle (Michael Smiley) to take out the suspected squealer. Once the violence begins, it gets pretty relentless, and beyond the realism the rest of the film nicely captures. More true to the sorry state of their lives is Karl’s partner, Valda (Kerry Peacock), who turns up, announcing she’s pregnant, adding to the tension.

Overall, there’s more to like than not in this production and its entertainment is not in the violence but in the emotions these misfits wear on their sleeves. Wheatley is someone to watch as he grows in confidence as a director.

The movie looks fine on DVD and it comes sans extras.