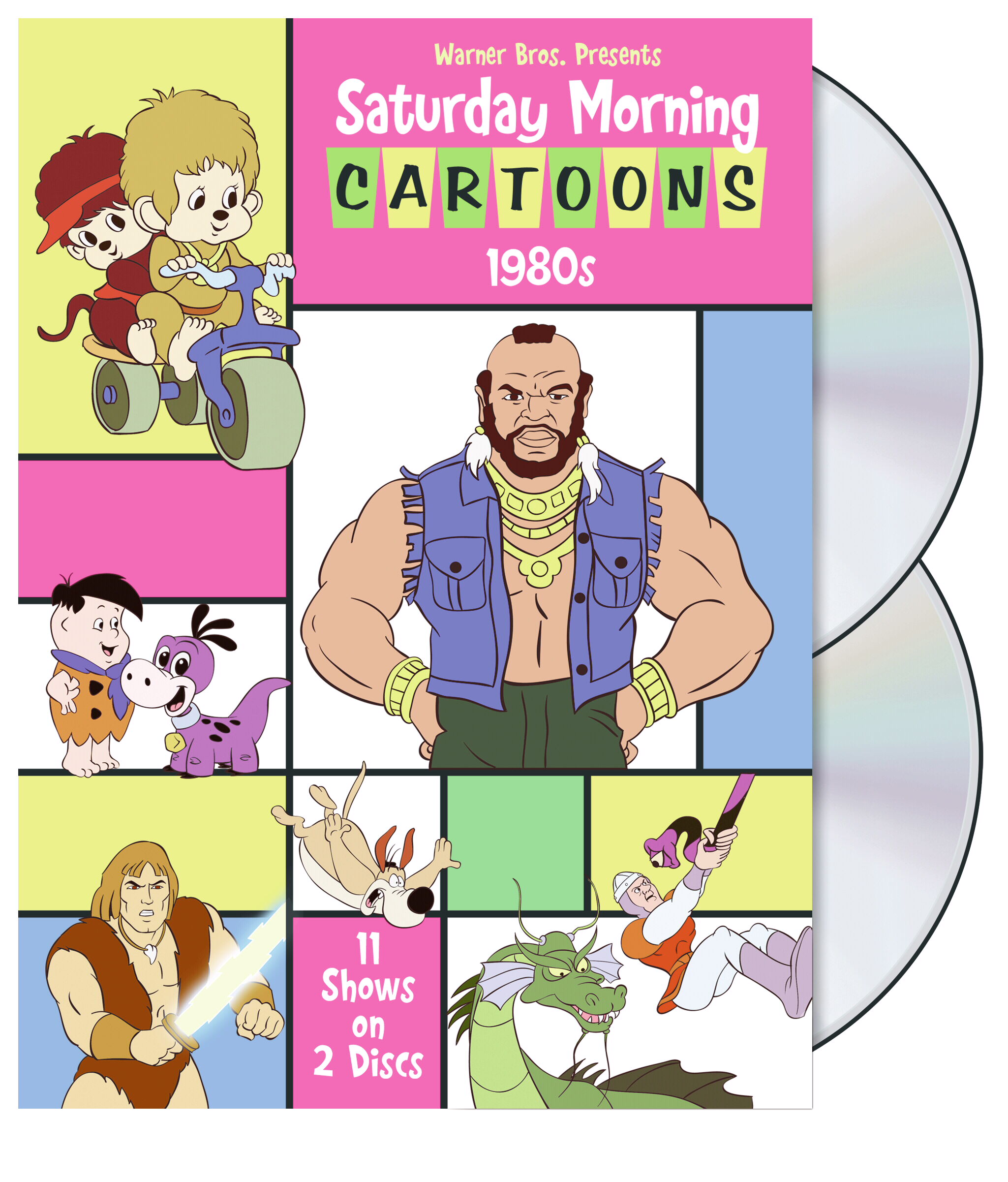 As the 1980s dawned, it was a nadir point for Saturday morning cartoon fare. Concerns over imitative actions by the young viewers led to a decrease in what could be shown on animated series. Additionally, rising costs led to shortcuts and more limited animation, plus the usual cyclic concern over televised violence. Throughout the decade several new trends emerged starting with a greater reliance on licensed properties and personalities to anchor new shows. While the handful of original series showed their allegiance to the latest trends, it also led to a great divide between what was aired first thing in the morning compared with shows for the slightly older audience.

Hanna-Barbera was still the number one provider of fare but Ruby-Spears and the new Marvel Animation proved competitive and they helped changed the look and feel of the cartoons.

Much, but not all of the above, is evidenced in the new two-disc Saturday Morning Cartoons: 1980s, Vol. 1

, being released Tuesday by Warner Home Video. There is an odd sampling of material for all age ranges here, using obscure series and ignoring some better known shows that might have made for a stronger disc.

We open with [[[Goldie & Action Jack]]], which ran from 1981 – 1984. The premise featured 18 year-old Goldie Gold, who used her wealth to run [[[The Gold Street Journal]]] and often accompanied her best investigative reporter, Action Jack. Accompanied by her dog Nugget (every series had o have a pet it seems), they went on adventures around the world. However, as seen in “Night of the Crystal Skull” they often stumbled into adventures and stories and Action Jack is more moron than journalist.

The first of several celebrity series follows with [[[Chuck Norris: Karate Kommandos]]]. The television action star filmed opening and closing bits then a goofy animated adventure followed. He’s accompanied by an odd assortment of followers and at least the animation is pretty sharp and the story moves at a nice clip. 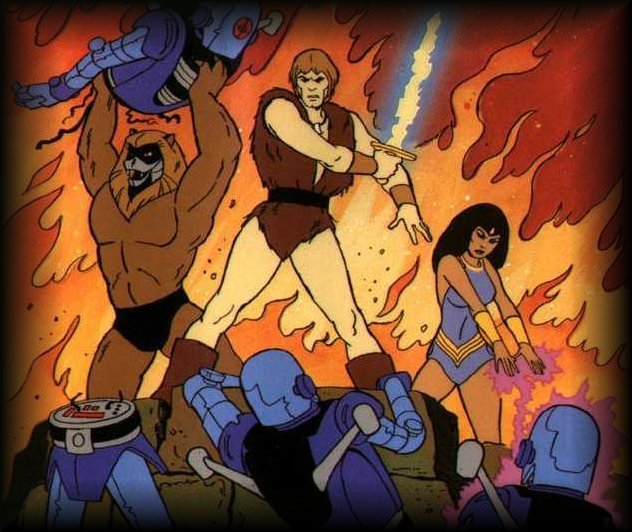 Next up is the oddest offering, an animated series based on the [[[Saturday
Night Life]]] nerd character Ed Grimley. [[[The Completely Mental
Misadventures of Ed Grimley]]]  ran in 1988 and featured animated
antics along with science lessons from The Amazing Gustav Brothers,
Roger and Emil. Ed would stop his story to sit and watch television
host, Count Floyd (Joe Flaherty), tell a not very scary story.

Rather than rerunning [[[The Flintstones]]] for yet another decade, this time
we are given [[[The Flintstone Kids]]], young versions of all your
familiar characters along with their peers and parents. The show tried
to impart life lessons to the audience while being entirely too
predictable in the three episodes seen here.

We’re back in the celebrity realm with an episode from [[[Mister T]]],
where the Mohawk with a mouth also wraps the animated episode with his
patter. The uninspired show itself has him running around with teen
athletes and his dog, which also has a bizarre Mohawk.

The first disc ends with the sole bonus feature, Lords of Light! an
eighteen minute piece all about the creation and enduring appeal of
[[[Thundarr the Barbarian]]].

The second disc opens with two shorts from [[[The Biskitts]]], a 1983
series featuring anthropomorphic canines living on Biskitt Island.
Somewhat flavored by [[[Robin Hood]]], they have adventures in service to the king. There’s a reason this ran for one season, and it’s the same reason
the following show, [[[The Monchichis]]], also last one year. Based on
the toys, they have wacky antics in trying to prevent the evil
Grumplins from controlling magic.

As with most of the series on this disc, our next offering is the
premiere episode of [[[Galtar and the Golden Lance]]], an original
series clearly trying to hope on the interest in sword and sorcery
prevalent throughout the decade. The H-B show has some nice design but a
tired premise as Galtar and the Princess work together to prevent evil
from winning the land.

A more imaginative S&S series is [[[Dragon’s Lair]]], spinning off
from Don Bluth’s clever video game. The gimmick in the arcade game was
that there would be decision points and based on which choice you made,
our hero either lived to continue his quest or die. The animated series,
with a larger supporting cast, also has the same concept with a
narrator telling you that if you chose A, this would have happened or
the alternative. Nicely animated and slightly amusing it’s worth a look.

Completing the adventure series is a [[[Thundarr]]] offering which
shows why the show maintains a cult following. “[[[Secret of the Black
Pearl]]]” shows us Thundarr, the sorceress Princess Ariel and the mutant
being Ookla the Mok in a post-apocalyptic Earth, confronting
super-powered nasties. Thundarr is none-too-bright, constantly being
educated by Ariel. The stories from the likes of Steve Gerber and Martin
Pasko coupled with designed from Alex Toth and Jack Kirby make this
series the standout show of the decade.

We then veer back to the ill-conceived and not well executed younger
children’s fare (it wasn’t until Disney offered up new adventures of
Winnie the Pooh that animation executives were reminded that you don’t
need to talk down to children to be entertaining). We get an episode of
[[[The Kwicky Koala Show]]] which is noteworthy only because it featured
some of Tex Avery’s final work. He died during production in 1980 and
the show lasted one season without his genius.

Being a Warner product we are denied the more interesting offerings of
the decade such as [[[Spider-Man and His Amazing Friends]]], [[[The Incredible Hulk]]];[[[ Zorro]]],[[[ Muppet Babies]]]; and [[[Ewoks/Droids]]]. What we could and should have been given were things like  [[[Space Stars]]], which offered us new adventures of  Space Ghost, along with The Herculoids,
Teen Force, and Astro and the Space Mutts, especially since they crossed
over into one another which would have been fun to see again. Clearly,
this is a collection for those who grew up during the decade or diehard
animation collectors.