Hancock Tips His Hat to Two Types of Investigators!!! 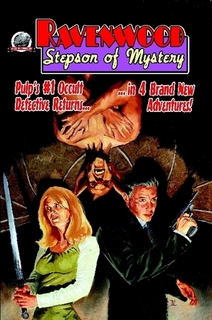 Airship 27 Productions and Cornerstone Book Publishers have made a name for themselves in modern pulp publishing.  Turning out quality product, pulling together top talent, and giving writers and artists a platform to ply their trades are all accomplishments of this Airship/Cornerstone partnership.  One other thing, though that they stand out as a leader for is revitalizing forgotten and obscure pulp characters in new stories for a modern audience.

With RAVENWOOD, STEPSON OF MYSTERY, Airship and Cornerstone have done that once again.

An occult investigator and supernatural crime fighter, Ravenwood had a handful of appearances in the heyday of the pulps.  Although the stories were of interest to some, they regrettably were pedestrian for the most part and didn’t really stand out.  These four new stories, however, not only stand out, but shine as the way this character should be written.

Raised by The Nameless One in Tibet, Ravenwood grew up to be the best at dealing with magical and supernatural crimes.  Losing his parents at an early age, Ravenwood benefitted from a pledge The Nameless One made to take care of him.  The stories in this volume are set in the 1930s and find Ravenwood, extremely wealthy, ensconced in a penthouse, The Nameless One there with him as well as Sterling, Ravenwood’s trusted butler.  From the position of entrepeneur, lackadaisical playboy, criminologist, or intense supernatural crimefighter, Ravenwood rights wrongs using his own intuition, magical knowledge and abilities, and an usual convenient helping hand from his ‘stepfather.’

Each author took hold of this obscure character and made him their own.   The interpretations here have the basic concepts in common, but each writer sees Ravenwood the man in a different light, giving the reader four enjoyable tales that spotlight four different pulp tomes, our hero cast in four different traditional pulp lights.  Combine this with the fantastic book design and the simplistic, yet evocative interior art and RAVENWOOD, STEPSON OF MYSTERY is a more than suitable reestablishment of a character who never should have vanished from pulp consciousness to begin with.

FOUR OUT FIVE TIPS OF THE HAT-Reread potential of this volume, particularly the first and last stories, is extremely high.  Definitely one to own.

THE WHO IS JOHNNY DOLLAR MATTER?
by John C. Abbott
published by BearManor Media
http://www.bearmanormedia.com/
3 Volumes 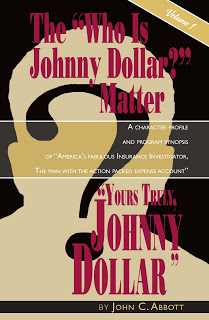 Pulp is on a comeback, we all know that.  One aspect of pulp that is still waiting to be fully realized, but is finally gaining notice is Audio Pulp.  Not only are new groups and companies stepping up to the plate to dramatize classic and new pulp tales, but there’s a whole collection of Pulp audio that has existed since and even before the heyday of the newsstand pulps-Radio shows.   And one of the best examples of pulp radio, which thankfully has over 700 of its over 800 episodes in existence and available, is YOURS TRULY, JOHNNY DOLLAR.

Johnny Dollar, ‘the fabulous freelance insurance investigator with an action packed expense account’, came to the airwaves in 1949 and ushered out radio drama when it finally left the air in 1962.  In that time frame, eight actors, including Dick Powell, Gerald Mohr, Edmund O’Brien, and Bob Bailey, portrayed this sometimes hard boiled, sometimes cynically sensitive, always two fisted and determined insurance investigator week in and week out.  YOURS TRULY JOHNNY DOLLAR is truly an epic example of old time radio and audio pulp.

John C. Abbott has given this fantastic show its due by producing one of the most epic, complete reference materials ever seen on any one topic.   Not only does Abbott include extremely detailed descriptions rife with bits of trivia and comment of every Dollar episode, he also provides a biography of Johnny.  Written as if Johnny Dollar could have been a real person, Abbott puts the many aspects of Dollar’s life into a concise, well written outline of his life, including his birth, where he went to school, how he became an investigator, and so much more.  And this is not a dry read in any way at all.  Abbott brings an obvious love for the DOLLAR material to the table and fortunately for the reader leaves that love all over the page.

FIVE OUT FIVE TIPS OF THE HAT-Truly, this book could be the model for anyone if they want to know how to do the best reference book possible.  Add that to the excellence of the subject Abbott covered and THE WHO IS JOHNNY DOLLAR MATTER ranks as a new classic in my reference library.