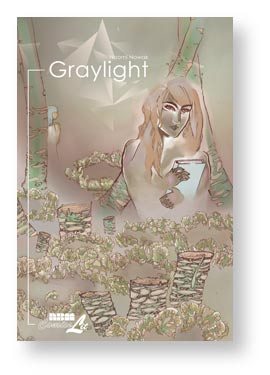 [[[Graylight]]] is a wispy story surrounded with lovely, ethereal artwork, but utterly fails to create characters or situations with enough clarity to maintain your interest. The attractive Swedish artist hails from Sweden and developed her style as she discovered comics and began producing graphic novels, influenced by European albums and [[[Manga]]].

She received excellent notices for her first two offerings and this third book, released this month through NBM’s ComicsLit imprint, is said to be aimed at women 16 to 24.

It’s attractive and certainly a quick read but everything is sketchy. A woman has a son, Edmund, sees her mate walk away, and then she becomes a reclusive and famous author. Erik, middling journalist arrives in town to seek her out for a profile but first encounters Sasha, a woman who claims to be collecting geological samples but clearly has been drawn to the area for other reasons. She’s been there long enough to develop relationships with the locals and has a demonstrated habit of stealing. When she accompanies the journalist, the woman is offended that permission wasn’t obtained before hand and is rude. The younger woman leaves but not before stealing a book. Over the next few weeks, the handsome son stalks her in the hopes of retrieving his mother’s book.

So, we have several triangles going: the two women and the son; the two men and the woman. Toss in some witchcraft and you have the makings of something interesting.

Nowak’s pastels and art are lovely to look upon and her page compositions are interesting to study. Somewhere along the way, though, she needs to stop and learn storytelling, both in words and pictures. Her characters are underdeveloped and the exact motivations for the reclusive mother/witch are murky at best. Who Sasha is and what she really wants is left up in the air.

The story is sparse and the dialogue does nothing to help the reader. In fact, her characters need more distinctive voices to help make them more identifiable.  While lovely to look at it, its misty look and feel is easily forgotten because you care nothing for the people and the situation. The book has no substance and can be easily dismissed. If you like Nowak’s art, then check this out, otherwise, wait until she has something to say.