Review: ‘Harbinger: The Beginning’ by Jim Shooter and David Lapham 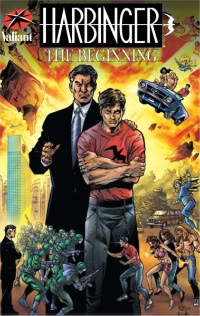 I had forgotten how much superhero comics had changed in the past 15 years when I picked up Valiant’s new Harbinger: The Beginning

It’s impossible to evaluate the stories without looking at the context of their era. True, [[[Harbinger]]] never reached the excessive silliness of Liefeld’s [[[X-Force]]], but it’s populated by edgy characters with dated nicknames like “Torque,” who spout even more dated phrases like “buttlick.”

Since the crash of the ’90s, comics have largely moved toward a more serious and realistic tone, and Harbinger (created by Jim Shooter and David Lapham) stands in stark contrast. All the same, in many ways the book holds up, probably no surprise since it once garnered a great number of fans.

What’s especially appreciable about Harbinger is how it strays from the superhero stereotype, something even today’s books struggle to do. The protagonist, Pete, is not a clear-cut hero; instead he’s an immature and often egotistical teen who doesn’t understand the dangers of his powers. The villain, Harada, is no great man, but his central goal is to protect the world from Pete.

As much as anything, Harbinger is about the folly of youth and the lessons to be learned from those mistakes. It falls into cliché and hollow edginess, but more often jumps in surprising directions and offers a new (again, in context) take on heroes.