ELIZABETH MASSIE, Writer of JULIE WALKER IS THE PHANTOM and the upcoming MOON MAN for RETURN OF THE ORIGINALS, MOONSTONE BOOKS 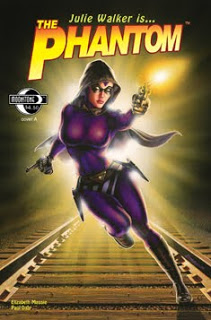 AP:  Elizabeth, it’s a treat and a half to have you with All Pulp today!  Can you give us a bit of background on yourself, personal and professional?


EM: Thanks so much! I’m a native Virginian, living within 20 miles of where my family moved in 1746. We tend to stay put once we put ourselves somewhere. I’ve been a newspaper receptionist, a camp counselor, a life guard, a teacher, and have been a full time freelance writer for 16 years. My first short story, “Whittler,” which was published in the now gone but well respected magazine, The Horror Show, earned me the grand sum of $2.00. Since then I’ve had close to 100 horror short stories published in magazines and anthologies, have had 23 novels for adults and young adults – both historical and horror – published by some of the best houses in the biz (Berkley, Tor, Simon & Schuster, Pocket. I’ve won two Bram Stoker Awards for my fiction, presented by the Horror Writers Association. I later branched out and did several media tie-in novels, one set in the Dark Shadows universe and one in the Buffy the Vampire Slayer universe. It was the first time I’d hopped over to play in someone else’s sandbox but found it a great deal of fun. Since then I’ve continued writing original fiction, nonfiction for educational publishers, and media-tie ins. In 2001 I met illustrator Cortney Skinner at the best horror convention EVER – Necon, which is held in Rhode Island. He moved down to Virginia and we’ve been sharing life and abode ever since. In 2010 I won a Scribe Award from the International Association of Media Tie-in Writers for my novelization of the third season of Showtime’s television series, The Tudors. I love Pepsi and chai. I hate cheese. I love the beach and World’s Softest Brand socks. I have never bungee jumped or skydived. I hate fun houses; they scare me.

AP: Let’s talk about your work with Moonstone.  You’ve worked with pretty two classic characters, Zorro and The Phantom.  What about these iconic characters appeals to the writer in you?


EM: Well, Zorro was my first crush, so that’s an appeal all to itself. When I was a little girl we used to watch Disney’s Zorro. I was too young to know it was a crush, but why else would I carve a Z into the wooden base of my grandmother’s old-fashioned sewing machine? Plus, I loved that he was such a good guy with a sense of humor. So confident and so brave. People looked up to him and depended on his being there in the nick of time. What’s not to love? Even though he wore a mask and cape there was nothing scary about him. Writing about Zorro was really enjoyable in that I was able to take a serious story but highlight Don Diego’s sense of humor and ability to go back and forth between two completely different personas – the rich young man who enjoyed relaxing and playing cards and had no desire whatsoever to fight and the dashing mysterious hero who can out duel, out ride, and outwit any criminal who comes along.


The Phantom has many of the same appealing characteristics. He fights crime to protect the innocent from the clutches of evil. He also lives two different lives, and wears a disguise when fighting criminals and defending the defenseless. However, the Phantom (AKA Kit Walker) is a more brooding, more serious character, even during his “down time.” As a writer, I could appreciate the depths of character here, how his life truly is tuned in to the needs of others and how that can torment his soul. This gives a writer a lot to work with. I also love the exotic setting of his home – the fictional country of Bengalla in Africa.

AP: Your work with the Phantom involved a twist to the usual take on the character.  Can you tell us a bit about ‘Julie Walker is the Phantom’?  Was there any particular impetus or inspiration for the idea?


EM: Well, I was actually asked to do a “female Phantom” comic from the outset. I thought it was a grand idea, and set to work researching the Phantom and the various time periods in which Phantom stories have been written. Some might not know that there has been a long line of Phantoms, beginning in 1536; that the mantle is passed down from father to son. My story begins as a more typical Phantom story, with the legendary Nellie Bly setting out on her round-the-world trip in 1889. Kit, as the Phantom, sets off to secretly protect her from those who wish her harm, but is wounded terribly soon afterwards. This leaves Kit’s twin sister, Julie, to be the Phantom in his stead. I loved this…writing about two strong, independent, adventurous women in one comic. 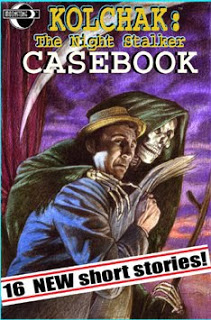 AP:. You’ve also written a story for Moonstone about a classic TV character. Tell us about writing KOLCHAK, THE NIGHT STALKER.


EM: Carl Kolchak is another t.v. character on whom I had a bit of a crush, though this time I was definitely grown up! Unlike Zorro or the Phantom, Kolchak is just a guy wanting to do his job – a reporter who investigates and exposes and often unwittingly fights and conquers monsters of all every imaginable types. In my story, “They Came From the Dark Ride,” two of my favorite topics were merged – The Night Stalker and old Coney Island, which in itself was a fascinating, colorful, fun, yet potentially terrifying place. Kolchak encounters a man who has purchased several hundred-year-old rides from Coney Island, with no clue as to what supernatural elements he’s actually brought to his home by doing so. Good ole’ Carl must investigate, figure it out, and try to halt the deadly force.

AP: With your work with pulp characters, you’re definitely stepping into an area that has always been largely male dominated and unfortunately so, in most peoples’ opinions I think. Do you think female writers bring anything different to the table in presenting pulp stories than male writers?


EM:  I don’t think so, at least not now. I’ve heard some people say women writers (in pulp, in horror, in science fiction, in mystery or crime fiction) tend to write more emotion-based or character-driven works, but honestly, these days I think men delve into the emotion of the pulp characters as often as women do, and women as often write action-packed, plot-driven, hard-edged stories as the men do.

AP:  What do you feel is the appeal of pulp fiction and characters to the audience of today?


EM: People love a good hero, someone who, like themselves, struggles with the actualities of real life but are able to turn on a dime and go out and fight with strength, courage, determination, and purpose for those in need or those in peril. It’s fun to imagine such people exist; and hey, I not only imagine it but believe it. There are amazing heroes all around us, they just don’t wear capes or have comic books about them. 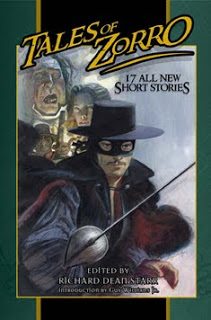 AP: You have an upcoming project that surely will be a favorite for pulp fans. Talk to us, if you can, about your MOON MAN comic.

EM: Moon Man is a great crime fighter. Living in the era of the Great Depression, he is a police detective in his real life but has an alter ego that robs from the rich and gives to the poor while wearing a robe (or cape, depending on the story) and an “Argus glass” bowl on his head. Quite a wild and wonderful bit or creativity there! The glass bowl allows him to see out, but others can’t see his face. It’s also rigged so his breath doesn’t steam up the inside. My wide vision Moon Man comic, “Feint of Heart,” pits our hero the Moon Man against a wealthy, devious, and evil real estate mogul who wants to destroy a tenement (where many poor people live!) for his own purposes while also luring his young ward (a pretty female boxer) back into his clutches for his foul purposes.


AP:  Are there characters in the pulp realm that you haven’t tackled yet that you’d love to get your hands on? If so, who and why?

AP: Do you have any projects outside of Moonstone that might interest the pulp community?


At last I’ve been dragged into the world of e-books. While I love holding books and comics in my hand, I also realize that e-books are here and that many people are buying them. Soooooo…..some novels and collections from my back list are heading that way. In fact, my first novel, Sineater, (a Bram Stoker Award winner) is now available from Crossroad Press http://crossroadpress.com/catalog/product_info.php?products_id=126 and soon will be available as an audio book. I also have several new ghost stories out in anthologies from Woodland Press, including two due to be out October, 2010 –“Something You Need to Know” in Specters in Coal Dust and “Someone Came and Took Them Away” in Legends of the Mountain State 4. 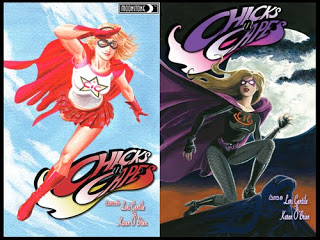 EM: A new anthology, edited by Lori Gentile, is due out in a few months. It’s called Chicks in Capes. The title alone probably gives you a good idea of the contents! Each writer (yes, all female writers and illustrators in this project) was to write a new story based on a character they owned or a new character they created for the book. My story, “Silver Slut: And So It Begins,” features a young bike messenger who discovers to her amazement that, while wearing a silver-lined cape given her on her birthday she has several super powers, but also discovers to her dismay that the first name someone calls her when they see her in her cape becomes her super hero name. My story is fast-paced, character-driven, and with a lot of humor.

AP: Again, it’s been a pleasure to visit with you!