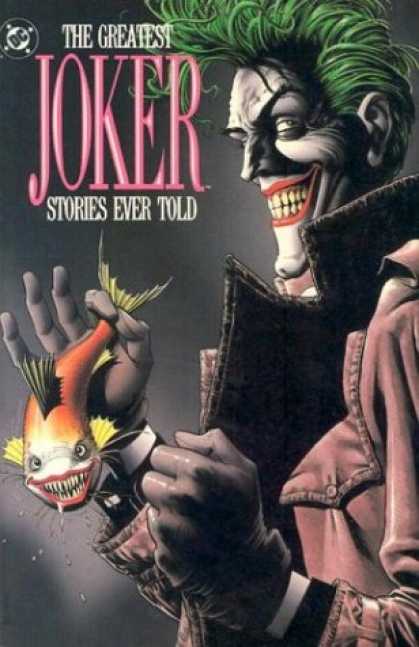 Sure, you might stick them in jail — or an asylum — for what they’ve done. You could even throw them off a rooftop, leaving them paralyzed for life. But that won’t change the fact that they already did it. They scored a victory, even if it was short-lived.

The Joker is definitely a villain with a better track record than most. Lex Luthor may have become President and nearly destroyed Superman a few times. But he never killed Lois Lane or tortured Ma and Pa Kent. The Clown Prince of Killers, however, has had quite a few shining moments.

What drives this evil mass murderer? Some have claimed the chemicals which altered his pigmentation also damaged his brain. Some have claimed he suffered such psychological trauma and simply snapped. Some believe his brain actually acts on a higher level of perception, forcing him to operate with a logic we simply aren’t equipped to understand. Half of his crimes seem to be a way of trying to bring Batman to his own way of thinking, that there is no hope in the world, only chaos.

The fact that we can argue about the Joker’s sanity (or lack thereof) is part of what makes him so interesting. And so, with the release of The Dark Knight — and the Joker — looming near, we’ve sifted through the long and bloody history of the Harlequin of Hate to find those victories which stand out above the rest. Steel your nerves and enjoy ComicMix Six: The Six Greatest Joker Victories.

And if you’re interested, you may want to check out our related article, 11 Batman Stories to read before The Dark Knight.

6. THE MURDER OF SARAH ESSEN

Around the tough cops of the Gotham City PD, Sarah Essen, second wife to Jim Gordon, was a well-respected detective, known for standing by her principles and her faith in the legal system, never agreeing with her husband that the Batman was a necessary force at times. In a city full of corruption, she was an idealist.

Then came the horrible Christmas Day when the Joker kidnapped several newborn babies. Batman’s forces and the GCPD all did their best to scour the city and find the children. When Sarah found the Clown Prince of Killers, he tossed one of the babies at her, forcing her to drop her weapon as she caught the child. With Sarah now defenseless, the Joker shot her in the head with neither a laugh nor a smile. He just said "Merry Christmas" and walked outside, surrendering himself to the police so he could taunt Jim Gordon in person.

This event happened at the end of the year-long story Batman: No Man’s Land

, which has been collected in several trades.

5. THE PARALYSIS OF BARBARA GORDON

After yet another escape from Arkham Asylum, the Joker decided to prove that anyone who had one really horrible, traumatic day was capable of thinking like him. To this end, he would kidnap Commissioner Gordon and drive him insane. When Gordon’s adopted daughter Barbara answered the door, the Joker promptly shot her, paralyzing her for life. The Joker did this to cause Jim Gordon torment, not realizing that Barbara was also the (then semi-retired) hero known as Batgirl. Without even thinking about it, he had altered the woman’s life forever.

by Alan Moore and Brian Bolland. 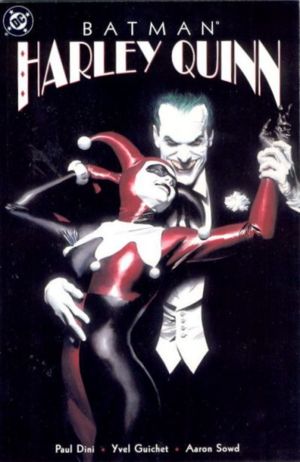 What can be worse than murder? The corruption of innocence, some would say.

Harleen Quinzel was a hotshot young intern studying psychoanalysis who requested to work at Arkham Asylum in the hopes that it would help further her career. The Joker was amused that her name could be altered slightly to resemble the word "harlequin" and took an interest. Believing she was smart enough for the Joker’s mind-games, Harleen attempted to analyze him. Over several weeks, she found herself shocked and touched by the criminal’s tales of a traumatic past and the brutal treatment he recieved from those who didn’t understand his unique view on life.

Harleen eventually adopted a jester’s costume and renamed herself Harley Quinn, believing that she and the Joker loved each other. But she had underestimated the killer’s skill at manipulation. He had  found her name amusing and decided to turn her into a co-dependent accomplice just to show that he could.

Harley’s origin and introduction into mainstream DC continuity can be found in the graphic novel Batman: Harley Quinn

(which takes place during the events of No Man’s Land),  written by Paul Dini, Harley’s own creator. The original version of her origin can be found in the story Mad Love (and you should check out the Batman animated series episode of the same title).

3. THE THEFT OF MR. MXYZPTLK’S POWER

Superman has often found himself powerless against the machinations of the imp called Mr. Mxyzptlk, a fifth-dimensional being whose super-science powers can only be described as magical. Fortunately for the Man of Steel, Mxyzptlk is a prankster at heart rather than a killer.

So you can imagine how bad it became when the Joker tricked the little imp into giving him the secret of all his powers? The Clown Prince quickly used his new god-like abilities to literally remake the world. He caused Superman to think he was insane, and killed Batman on a nightly basis only to resurrect him each morning. The Man of Steel and Mxyzptlk just barely defeated him in the end.

This story of the Joker attaining god-like power is in the trade Superman: Emperor Joker

2. THE CORRUPTION OF CATWOMAN

After years of skirting the edge between villain and hero, Selina Kyle AKA Catwoman decided she was done being a criminal. She joined the Dark Knight and Jason Todd (the new Robin). The Dymanic Duo was now a Dymanic Trio and Batman at last had a woman with whom he could share all aspects of his life.

And then the Joker found out about this little romance and decided to change the ending. The Clown Prince of Killers kidnapped Catwoman and, using a modified CAT scan, reprogrammed her mind, blurring her memories of the last several months and implanting the suggestion that the Batman had spurned her and left her to die. When Catwoman awakened, she was fully dedicated to crime again and now had a new hatred for the Dark Knight.

Bruce Wayne had finally found a woman he could be honest with, a woman who understood him. And the Joker had ripped her away.

This two-part story first appeared in Detective Comics #569-570, written by Mike W. Barr and illustrated by Alan Davis. It can also be found in the trade The Greatest Joker Stories Ever Told

He’d corrupted Catwoman and altered her memory. Over a year later, he crippled Barbara Gordon for life. And a year after that, the Harlequin of Hate set his sights on the second teenager to take on the mantle of the Boy Wonder.

Even non-comic fans have heard about his event. It all started when Jason Todd discovered that the woman who had raised him was not his biological mother. Using his detective skills, he tracked down his true mother to the Middle East. But the Joker was there too, blackmailing the woman into helping him.

As Batman left to thwart one of the Joker’s schemes, Jason decided try and tackle things head on, only to be lured into a trap. The Joker couldn’t pass up the opportunity to do some real damage and beat young Jason to within an inch of his life with a crowbar. Then, to eliminate definitive evidence of his presence, he left him in a locked warehouse with a bomb. Batman arrived mere moments before the bomb exploded. When he found Jason, the body was already cold.

In recent years, Jason was resurrected (quite literally) but that does not change the fact that his death had a profound effect on the Dark Knight, making him more cynical and emotionally guarded and forcing him to never forget that anyone he recruited into his war on crime was putting their life into his hands.

What makes this event even more famous was that Jason’s fate was decided via a hotline number. If you dialed one hotline, you were voting that Batman would find his body in the rubble in the next issue. If you called a second hotline, you were voting that Jason had miraculously found a way to survive and Batman would find him alive (though seriously injured) amidst the rubble. The final results were by a narrow margin, but the fans made it clear that the Joker would have yet another victory.

This story can be found in the trade Batman: A Death in the Family

, written by Jim Starlin and illustrated by Jim Aparo.

Though it is not listed here, an honorable mention goes out to when the Joker executed Alexander Luthor of Earth-3 (a man who had threatened the entire universe, helped cause Superboy’s death, and had escaped all of Earth’s heroes) and to the story featured in Detective Comics #726. A self-contained single-issue story, it features the Joker orchestrating a child-abduction from the safety of his asylum cell as his own way of celebrating the anniversary of Jason Todd’s death. This issue, written by Chuck Dixon and illustrated by Brian Stelfreeze, contains some great dialog and is another show of the Joker one-upping Batman by introducing new doubts into the Dark Knight’s mind and forcefully reminding him just how well he truly knows and understands the hero.

So what are you waiting for? Go out there and read for yourselves!

Alan Kistler has been recognized by Warner Bros. Pictures and mainstream media outlets such as the New York Daily News as a comic book historian, and can be seen in the "Special Features" sections of the Adventures of Aquaman and Justice League: New Frontier DVDs. His personal website can be found at: www.KistlerUniverse.com.