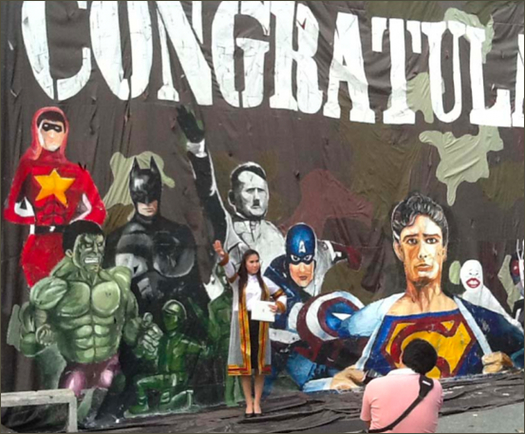 If you’re in Chulalongkorn University’s freshman art class… well, you’re in Thailand. And you’re attending one of that nation’s leading schools.

Oh yeah, and you’re also as dumb as a bag of doorknobs. And The Simon Wiesenthal Center doesn’t think much of you.

Go figure. As you can see from the above photo, the freshmen painted a farewell banner to the outgoing class of 2013. Yes, that’s Superman, Batman, Captain America, the Incredible Hulk, and Adolf Hitler sending the graduates off to their future.

The idea was to show that good and bad people coexist in the world, according to school dean Dr. Suppakorn Disatapundhu. He also said “(We) would like to formally express our sincere apology for our students’ superhero mural… I can assure you we are taking this matter very seriously.” He did; they took it down. Well, they took it down after two days. And after photos got out showing enrobed graduates imitating the infamous Nazi salute.

You will note the superheroes (giving the Hulk the benefit of the doubt) were in color and Wicked Uncle Adolf was in greytones. “They told me the concept was to paint a picture of superheroes who protect the world,” Dr. Suppakorn told the Associated Press. “Hitler was supposed to serve as a conceptual paradox to the superheroes.” I guess something got lost in translation. The Camptown ladies sing this song, Doo-da, Doo-da…

Now, as a professional comic book editor (depending upon how you define “professional”), I would not hire these students. But it’s not out of any perceived sense of anti-Jewish or pro-Hitler feelings. Absent of other information, I’m willing to take Dr. Suppakorn at his word. And I wouldn’t pass them by because they are undereducated. If you can draw swell and you make deadlines and you don’t throw up on the publisher’s rug, you’ll get lots of work.

I wouldn’t hire them because, artistically speaking, these kids really suck at their chosen profession.

As for the folks at the Wiesenthal Center: you guys gotta work on that “Never Again” thing. You’re losing traction.