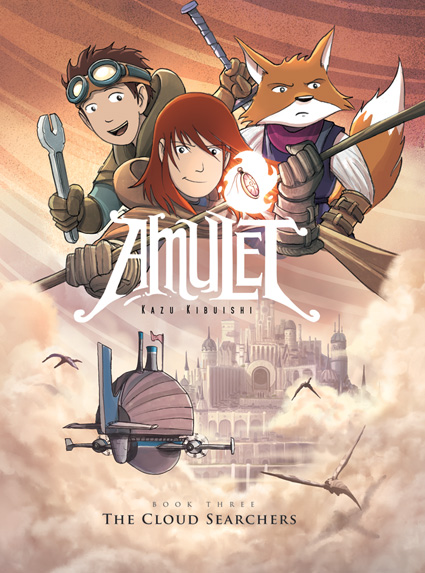 When last we left the cast of [[[Amulet]]], they were in the forest being chased by the bad guys and things were slowly starting to make sense for Emily, keep of the powerful stone. They managed to survive the evil king’s forces but it took a toll, damaging the mechanical tree house they used for a refuge.

Now, a year later, the third installment in Kazu Kibuishi’s fantasy graphic novel series continues from Scholastic’s Graphix imprint. Across 200 colorful pages, Kibuishi manages to explain a bit more about what is going on, raising the stakes, and moving the players to a new level.

Unfortunately, the overly familiar story gets feels even less original as they wend their way to Mos Eisley in search of a pilot wiling to take them to the cloud city of Bespin.  That’s pretty much all that happens from a big picture standpoint but we also see Emily accept the power of her stone and begin to train with it. She and the prince, Trellis, forge an unusual bond.

The remainder of the cast is woefully underutilized so Emily’s mom, her brother Navin, the titular leader Leon Redbeard and others are all along for the ride but are given virtually nothing to do. Instead, we meet Enzo, the grizzled pilot of the Luna Moth, who of course has an unexplained history with Selina, owner of the floating fueling station.

Filling out the rest of the book are either chase scenes, fight scenes or aerial combat scenes that must be fun to write and draw but do little to make the world seem any more real or interesting. There are also all-too-brief interludes such as a nice bit between Emily and her mom, but doesn’t make either character any more interesting.

There’s no recap page so anyone starting with volume three is somewhat lost nor do we have a sense of how many volumes it will take for Emily the Stonekeeper to fulfill her destiny and rid her world of the evil king.

The world of Alledia, described as a land of “wildly imaginative and dangerous things”, is the most imaginative part of the series and Kibuishi is ably assisted by an army of colorists who do a nice job. The notion of an order of stonekeepers protecting the world is a timeworn concept that should offer some twists and turns but seems to be merely a semi-sentient object of power.

While these books remain top sellers for Scholastic, I can’t help but want something fresher and more imaginative for the 9-12 readers who seem to gobble these books up.