A mysterious creature is on a vendetta to track down the men who wronged him, and there’s only one left, a man he calls…the Doctor?  Quite a start for this western-themed outing, the first for the show since 1966’s The Gunfighters. Spoiler alerts are in full effect, mind the fellows with the guns, and let’s mosey into this town and see what’s going on… 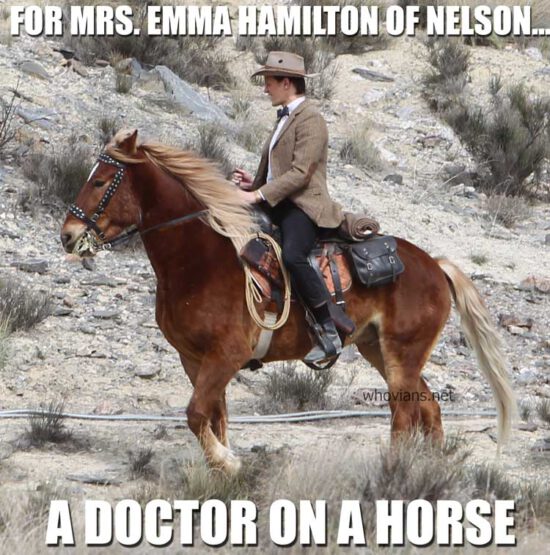 A western town in 1870 has been barricaded behind a field that prevents food delivery.  The being behind it, known only as The Gunslinger, had demanded the town turn over an alien only referred to as “The Doctor”.  So when The Doctor arrives in the town, the welcome is a bit…cold.  He learns quickly that he is not the one being searched for – another alien came to this town some years ago, and has been their savior and protector from a number of deiseases and natural disasters.  Alas, it turns out he’s being chased for a very good reason – he was a scientist on his home world, one who converted many of his own people into cyborg warriors to win a massive war.  When they were “decommissioned”, one survived, and he is the one placing the town under a one-man siege. The Doctor is in a strange position – can he bring himself to hand over a war criminal to meet his just demise?

An episode quite heavy with drama and portent, one far more about The Doctor’s life and past than the ostensible bad guy of the story.  Once again, we get a look at how The Doctor has grown darker when he doesn’t have any friends about him.  Matt Smith is doing a very good job of playing a man far older than his looks, and carrying a heavy load of acts.

Ben Browder (Isaac) may be known to you.  He played John Crichton on Farscape, Cameron Mitchell on Stargate SG-1, and Sam Brody on Party of Five.  He even got to do another genre western – he played Bat Lash on the Justice League cartoon.

Adrian Scarborough (Kahler Jex) has most recently been seen in the remake of Upstairs Downstairs, and a long list of work in British film and television, but fans of Mark Gatiss’ friends The League of Gentlemen will recognize him as the surgeon turned children’s clown Mister Jolly in in Reece Shearsmith and Steve Pemberton’s project Psychoville.

Garrick Hagon (Undertaker) is one of less than 30 actors who have appeared in both the original and new series of Doctor Who.  He first appeared in The Mutants back in 1972.  He’s had a long career in both film and TV. And oh, yeah, he played the most famous character to be almost entirely cut out of Star Wars – he was Biggs Darklighter, Luke’s best friend, who said Luke was “never going to get out of here”.  His big scene on Tatooine was cut out, and has yet to be restored – it only exists in a couple photos from an early storybook adaptation of the film near its release. Some footage in the rebel base was restored in a recent special edition, but there’s still a sense of “Who is this guy” to the whole thing.

Toby Whithouse (Writer) is an old hand on the series, having written four episodes for the new series before this (and one for Torchwood), and is also the creator of Being Human, another popular genre series, and one sharing a number of castmembers with Who.

Saul Metzstein (Director) did the previous episode, and will be back with two more episodes in the second half of the season.

THE MONSTER FILES – One could argue that there is a monster in this episode, though not of the most commonly accepted variety.  The Kahler are described by The Doctor as one of the most ingenious races in the galaxy. Considering the work he did improving the lifestyle of the town of Mercy, that certainly appears to be so.  Alas, that ability to build things carries over to engines of war, and when one is in the middle of a war, one becomes short-sighted, not considering the long-term results of one’s choices.

The Gunslinger is a more obvious monster, but one doing things for a more just reason, if a bit personal.   We’ve seen no end of cyborgs on Doctor Who – from the obvious example of the Cybermen, there’s The Captain from The Pirate Planet, the Toclafane, the converted final members of the human race in Last of the Time Lords, and even monsters like the Loch Ness Monster (Terror of the Zygons) and the Peking Homunculus (Talons of Weng-Chiang) qualify.

UNDER WESTERN SKIIIIES – This episode is steeped in history in a very real way. It was filmed at both “Mini Hollywood” and “Texas Hollywood”, a pair of combination movie sets and tourist attractions in the Andalusia area of Spain.  Mini Hollywood was designed and filmed for Sergio Leone’s classic For a Few Dollars More.  When it was later used for The Good, The Bad and the Ugly, it was bought by the extras and made into a tourist attraction.  The two site have been used for dozens of classic films, including a staggering list of “Spaghetti Westerns”, like the aforementioned Leone films.

This isn’t the first time the show has used standing sets.  The Fires of Pompeii was filmed in Italy on the same sets as HBO’s series Rome.

IT’S WRITTEN ALL OVER YOUR FACE – The face mark of the Kahler are unique, and as individual as a fingerprint.  This is similar to the spot patters of the Tenctonese on the short-lived Fox series Alien Nation.

“I speak horse; his name’s Susan, and he wants you to respect his life choices” Once again, subtly slipping the non-traditional gender roles into the series without making a big thing of it. Even as a gag, it gets across an important point.  Oh, I’m sure some will complain te topic’s not being taken seriously enough, but some people have made never being happy their career.

“You’re a mother, aren’t you?  There’s kindness in your eyes. And sadness.” Jex sees a lot in The Doctor’s eyes later, but he’s not the first to sense Amy’s emotions.  Vincent Van Gogh sensed that Amy had “lost someone”, even though at the time she wasn’t even aware of it.

“I’ve matured – I’m twelve hundred years old now” The Doctor’s age has accelerated greatly in the last couple of seasons.  He jumped from nine to eleven hundred years old in the period he was traveling alone when he came back to see the Ponds in The Impossible Astronaut, and now, in between visits to see them, has aged another hundred.  Assuming he’s not just pulling numbers out of his Stetson, he’s spending a LOT more time alone than we’d ever seen before.  The tenth incarnation traveled alone for quite a bit in between the four specials of the last Tennant season, and he got quite arrogant, almost swaggering in his demeanor.  Last episode we saw him cast judgment on Solomon, and he almost does the same here to Kahler Jex.

“Looking at you is like looking into a mirror, almost” Jex makes The Doctor confront his own choices, the people whose deaths he’s been responsible for, and the ones he’s killed personally.  The episode is about how one atones for those choices, and whether or not that atonement balances things out.  There was a similar comparison at the end of The God Complex when the minotaur draws a similarity between himself and The Doctor.

“See, this is what happens when you travel alone for too long.” When he starts pushing Jex towards the border of the town, you expect it’s because he’s hoping the people of Mercy to stop him, to realize that they need to project their friend, and you realize no, he really is just handing him over to the Gunslinger.

We’ve seen a lot of discussion on the effect The Doctor’s companions have on him, even more so than the other way around.  Donna Noble cogently pointed out that “Sometimes you need someone to stop you”.  The periods we’ve seen him alone in recent seasons have resulted in a much more hard man.  Matt Smith said he’s certainly become a “darker” character of late, and the choices made in the past two episodes are examples of that.

“That’s how it started, Jex turned someone into a weapon.” Which is exactly what Mad Dalek Caan accused The Doctor of doing to his Companions.  And the longer he is without a Companion, well…someone has to be the weapon.  Note that The Doctor is wearing, drawing, and is ready to use a gun, something he abhorred only a short time before.  That’s not a mistake, it’s very deliberate writing.

NEXT TIME ON DOCTOR WHO – Little boxes, on the roadside, little boxes made of…well we don’t quite know. The return of UNIT, and The Power of Three, coming in a week’s time.