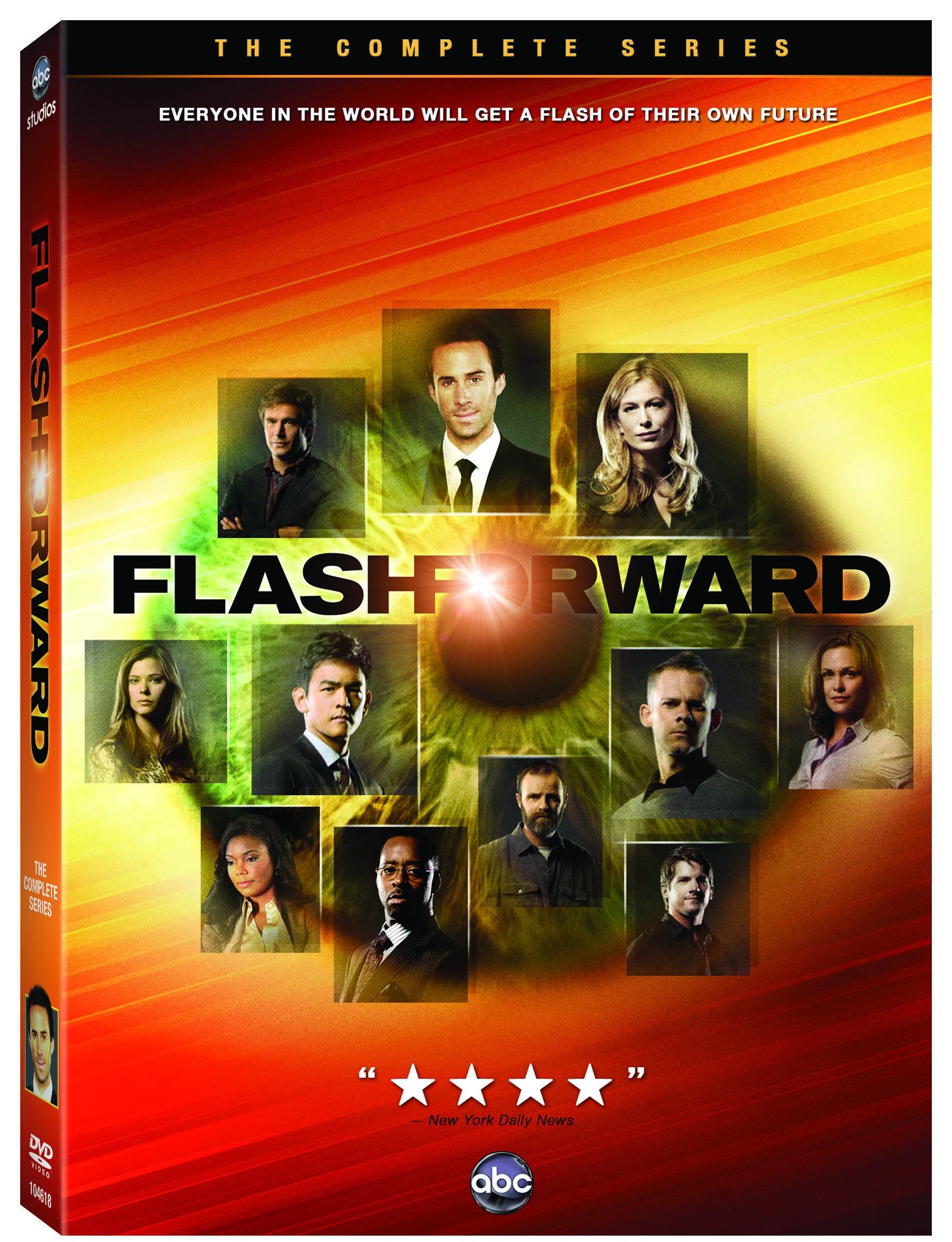 , a clever science fiction novel that showed how the world reacted to a suddenly global blackout and people glimpsing their futures 21 years hence. The catalytic event was centered at the CERN supercollider in Europe and largely focused on the scientists who worked there.

Interestingly, it was optioned for television and was being developed into a series at HBO, which decided it was trending more towards a prime time broadcast network show, so the rights got to ABC. With great fanfare and terrific initial reviews, the show debuted on September 24, 2009.

Maybe it should have stayed a limited run series on the premium channel. The resulting 22 episodes had lofty goals and a dynamite cast, but the sprawling story was messy, with way too many things not holding up well enough to sustain viewer interest. Ratings suffered after the show took a break at the midpoint and was finally ended on May 27. On Tuesday, ABC Studios is releasing FlashForward: The Complete Series

as a five disc set.

One of the creative problems was that the producers had no idea how much time they had to tell their story. They received an initial order for thirteen and it was a month after the debut before ABC ordered the back nine and subsequently added three episodes to the order. As the ratings nosedived, the order was trimmed from 25 to 24 and finally the standard 22. The feeling that they were spinning their wheels makes sense now that you see what they had to deal with.

Additionally, the personnel guiding the characters and storylines also shifted which led to altered tones. The show was initially being run by Marc Guggenheim, David S. Goyer and Brannon Braga but shortly after the full season was ordered, Guggenheim left the show and Goyer took over until February when he moved away from the sinking ship, letting his wife Jessika, Lisa Zwerling and Timothy J. Lea complete the series.

What should have been a limited series run made substantive changes to Sawyer’s novel beginning with altering the flash forward from 21 years to a handful of months, April 29, 2010. The ensemble cast was centered not at CERN but at the Los Angeles branch of the FBI. Over the course of the first few episodes, it was fascinating to see people react to their visions or lack of visions. The FBI team, led by an overly dour Ralph Fiennes, discovered a vast conspiracy behind the event and their investigations let us meet many people around the world and get a greater sense of what was experienced and how society was being altered. 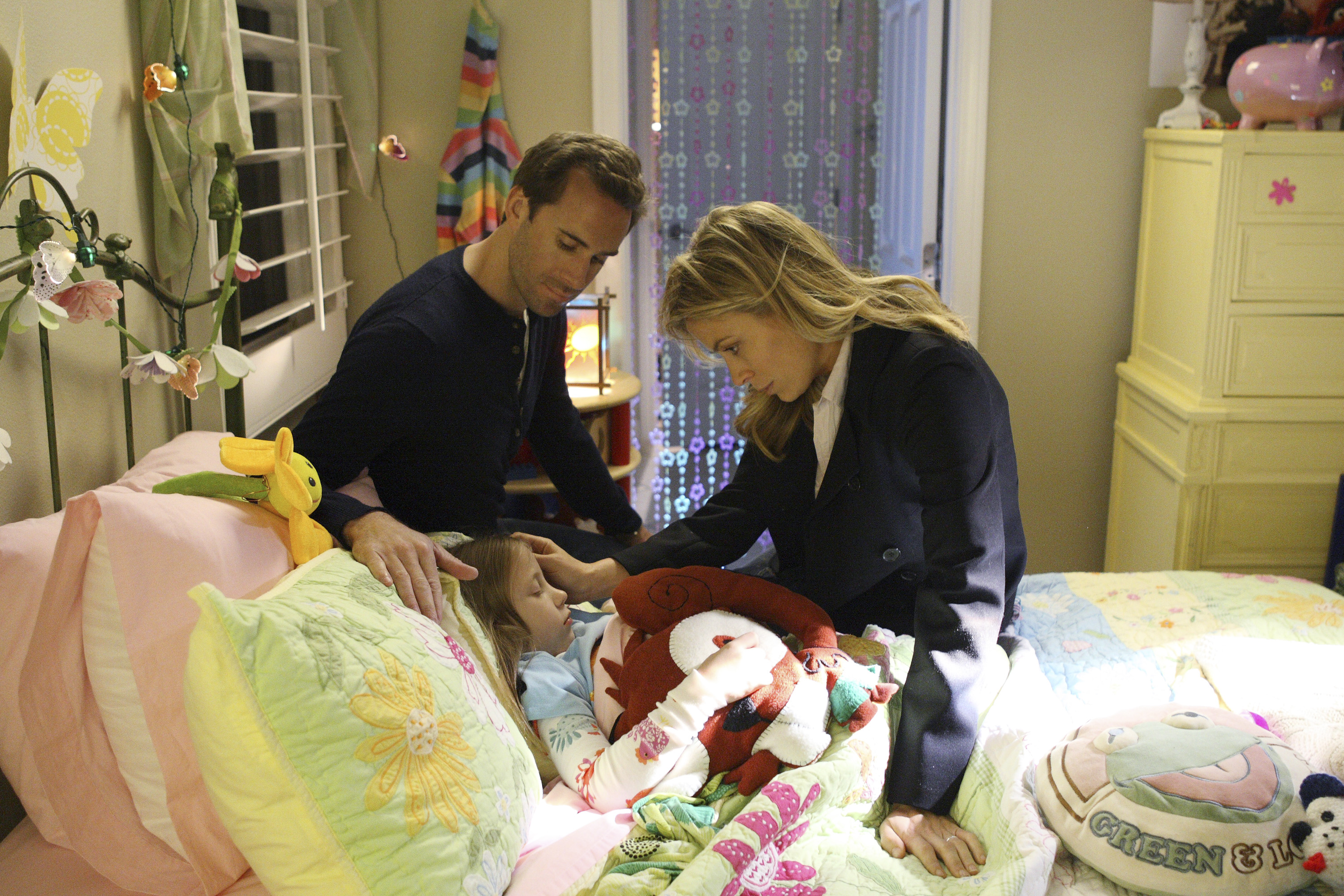 In some ways, there were too many stories and the focus lingered on
subsets of characters longer than they should have given the lack of
interesting things done with them. One of the best stories, for me, was
the personal journey of Janis Hawk, a single Lesbian who saw herself
pregnant in the future. Her professional secret was one of the best game
changing moments on any prime time series last year and Christine Woods
played it well.

Brían F. O’Byrne as the recovering alcoholic Aaron Stark had his own
journey, to the Middle East in search of his daughter, who to caught up
in the greater conspiracy. It felt tacked on and did a disservice to the
relationship between O’Byrne and Finnes.

Much as I enjoy his work, Dominic Monaghan never convinced me he was a
scientific genius caught up in forces beyond his control. It was the one
key miscast role. On the flip side, Japanese star Yūko Takeuchi was
note perfect as a Japanese engineer drawn to Los Angeles to fulfill her
destiny.

The center, though, was the triangle between Fiennes, his wife played by
Penny Widmore, I mean, Sonya Walger, and Jack Davenport. Those three
gave the show its emotional core from which all else radiated.

Overall, there was more good than bad spread across 22 episodes and if
you missed out, it’s worth a look. The final moment, hinting at a second
season– that was not meant to be was a cheat. By early spring it was
clear the show was dead so rather than button it up tight, they left
open a possibility.

The set comes with a nice array of bonus features rewarding the faithful fans who will miss this and curse ABC for preferring [[[V]]] to[[[FlashForward]]]. The bonus features from the first 10 episode set that was released
during the hiatus are included here along with a Blooper Reel and ten
deleted scenes (some nice, most extraneous). Meet Yūko is a nice 5:49
look at the Japanese actress’ introduction to American television
production. There FlashForward on the set: five somewhat interesting
short pieces showing how certain sequences were shot. There’s a cute 2
minute bit on the enigmatic appearance of a kangaroo amid the initial
carnage and the four full global interviews that were excerpted on the
show. Architects of Destiny, a 20 minute piece with cast and crew
discussing the show and the amount of informational withheld from the
performers was an interesting featurette.

Read the book for another take on the same theme while also settling in
to watch a show that aspired to greatness but fell short through
overreaching.