‘Ball and Chain’ in development at SyFy 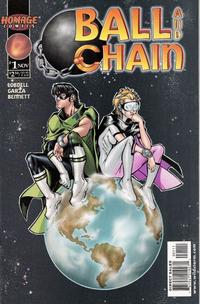 Ball and Chain, the comic series written by Scott Lobdell, drawn by Ale Garza, and published by Homage Comics/Wildstorm in 1999, has found its way onto this season’s development slate at the SyFy Channel.

The plot? After months of emotional tumult, Edgar and Mallory call their
relationship quits. As they say their final goodbyes, the ex-lovers are
nearly hit by a meteorite that, it turns out, imbues them with
extraordinary powers, turning her into Chain Lightning and him into Thunderball. Unfortunately, the powers only work when they are
in close proximity to each other. Though the last thing they want to do is stay together, they’ll need to try if they hope to overcome the
newly arrived other-worldly forces that threaten to destroy them and anyone else who gets in the way.

The series is a Universal Cable Productions/Fremantle Media co-production, and Scott Lobdell will be serving as an executive producer. And no, I don’t think this counts as one of those DC properties that the new regime was promising would be developed by Hollywood.

Historical tidbit: there was also a different pilot made back in 2001, starring Dan Cortese, Mindy Crist, Sasha Alexander, Eric Dane, and Kayla Blake. Executive Producer Howard Gordon later went on to do 24.