Get your first look at SYFY’s “The Vagrant Queen”

The Vagrant Queen, written by Magdalene Visaggio, illustrated by Jason Smith, and published by Vault Comics, is coming to SYFY in 2020 in a new 10-episode, one-hour science fiction adventure series starring Adriyan Rae. What’s it about?

Former child queen Elida was driven from her throne at age ten and forced to wander the galaxy, evading the revolutionary forces that wanted her dead. When an old frenemy claims to know the whereabouts of Elida’s long-lost mother, she is forced to return to her former kingdom and stage a rescue.

So what do you think?

Oh, and if you want to see what the comic looks like, here’s a preview:

I’ve been a fan of Superman since I was a wee lass – ever since watching that first Christopher Reeve Superman movie on TV. While the X-Men are relatable and Batman is cool and Deadpool is dark yet hilarious, Superman remains the ideal – the symbol of hope and the hero we should all strive to be.

I haven’t watched or read every shred of Superman that’s ever been produced, but I have consumed quite a lot of it; and even when I consider a particular portrayal to be an utter failure to embody Superman (hello, Man of Steel!!), I’m always willing to give the next iteration a chance. I mean, hey – how can you call yourself a Superman fan if you don’t have hope?

But with all the Superman that’s out there, there’s one part of the lore we hear about but still don’t generally see much of – a place that’s almost as much of a mystery to Clark Kent as it is to us. It’s the place of his birth – Krypton. Since a foundation point of the Superman mythos is that it was destroyed as he flew away from Krypton as the last survivor, it makes sense that we don’t often get to experience it in depth. Sure, we’ve seen flashbacks, and alternate universe versions, and the bottle city of Kandor; but we haven’t really lived and breathed Krypton.

The planet and culture have always fascinated me – when creators do approach or reference it, its laws and customs are often portrayed as stern and unyielding, despite its supposed advances in being civilized (and in the sciences particularly). As a lawyer and political theorist, I’m always interested in how societies are structured – and the success or failure of said structures. Not to mention it’s just plain cool to see a fully envisioned alien culture. I do sometimes feel that no one has quite done it justice yet; which isn’t surprising, since Clark Kent and Superman, not Krypton, are by default the focus of Superman stories.

For all the faults I found with Man of Steel (and I mean alllllll the faults. So many faults. Let me count the faults.) one thing I did like in that movie was the glimpse we got of that movie’s vision of Krypton. So I’m definitely interested in another modern take on the planet.

The upcoming Krypton show, which is coming to SyFy in 2018, aims to give us just that. It does have a serious challenge to overcome – giving us a version of Krypton and its inhabitants that both fits with why fans like Superman and also invests us in the fate of the pre-Superman alien culture and family. Given all the times Clark Kent’s human upbringing have been contrasted with the Kryptonian way of doing things, that may be a difficult bridge to cross – but I am more than willing to start that journey with the cast and crew and see where it goes.

Although SDCC saw the very first reveals about the show and thus there were some things we couldn’t yet discuss, I had a great chat with series star Cameron Cuffe (Seyg-El) and Executive Producers Damian Kindler and Cameron Welsh.

They shared what their vision for this (old) new world is like, what characters we’ll be seeing, and how they approach the House of El.

And happily, I can share that with you too.

Check out the interviews below for more Krypton details. And as always, until next time, Servo Lectio! 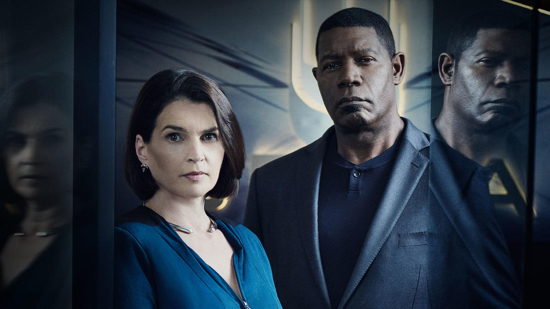 Welcome to the third and final interview from the Wynonna Earp cast & crew! In this video Anya talks with comic creator Beau Smith and show runner Emily Andras about how the Wynonna Earp TV show came to be, why it’s so special, how it was cast, and what to expect.

Wynonna Earp airs on Friday nights at 10pm on the SyFy channel. If you love westerns and/or Buffy the Vampire Slayer, this is a show you can’t miss.

Also, the comics are really cool too and they are available through IDW!

Hey everyone….Anya here & I’m back with Part 2 of my interviews with the cast & crew of SyFy’s Wynonna Earp.

This time I talk to Melane Scrofano who plays Wynonna and Shamier Anderson who plays Agent Dolls, the leader of the Black Badge division. OMG they were so nice, as you will see.

This is also a really cool interview because Melanie talks about who she’d like to watch the show and she emotionally talks about how her character is complicated and not only what she appears to be. She’s vulnerable, but can kick butt.

And at around 11:22 they give our Tweeks microphone some love. :)

This is such a great show with great girl hero roles. If you want to watch it it’s on SyFy on Friday nights at 10 pm.

At WonderCon, Anya got the chance to sit down with the cast and crew of the SyFy channel’s newest show, Wynonna Earp. Based on the Wynonna Earp comics by Beau Smith, the show follows Wyatt Earp’s great great granddaughter as she carries on the burden family curse…and also gets to kill evil things.

The show is a bit different from the comics as Wynonna is younger and just gaining her powers. There is also a sister dynamic that has been explained as a little like Frozen meets Buffy The Vampire Slayer meets X-Files.

One of the coolest things about this interview just might be how much of a comic nerd Tim Rozon turns out to be!

In parts 2 & 3 of the interview Anya will be talking to show runner Emily Andras, comic creator Beau Smith, and stars Melanie Scrofano and Shamier Anderson….so make sure to come back to watch those.

Wynonna Earp airs on SyFy on Fridays at 10pm. It’s also on CHCH in Canada. The show started on April 1st, so quickly….go catch up. It’s a 13 episode series, so you have time!

The Point Radio: THE EXPANSE Is Must See In 2016

Over the holidays, SyFy debuted the new series THE EXPANSE, based on he best-selling novel. The show is generating major buzz and just (today) got the green light for a second season. Star Cas Anvar talks about why you should be watching and how a love for comics helped him nab the role. Plus WWE Superstars Paige and The Miz talk about their latest movie role and what they would do if their careers ever ended.

The Point Radio: A Decade Of Fright With The GHOST HUNTERS

It’s been ten years of terrifying jumps and unexplained events on the SyFy series, GHOST HUNTERS. The stars of the show talk about how’ve they have survived a decade and a few the scariest moments they have faced. Plus funny man Jerrod Carmichael brings his talents to a new NBC series and tells us what to expect.

The Point Radio: The Kroft Magic Is Back

So many of our Saturday mornings were spent deep inside the imaginations of Sid and Marty Kroft. Now a new generation will have the same opportunity as Marty returns to TV with a new show, MUTT AND STUFF, for Nickelodeon. Marty talks about that plus the classics like BANANA SPLITS and SIGMUND. Then, reality show pioneer, Tami Roman (THE REAL WORLD, BASKETBALL WIVES) explains about how she is shaking things up on WE TV’s MARRIAGE BOOT CAMP.

More in a few days including a visit with Michael Rosenbaum (SMALLVILLE’s Lex Luthor) on his new bad guy role. Be sure and follow us on Twitter now here.

This weekend, SALEM wraps up it’s second season on WGN AMERICA (Sunday at 10pm/9pm Central). Series star Seth Gabel talks about the finale and what is ahead for season three, plus Moran Atias explains why you should be watching TYRANT on FX right now.