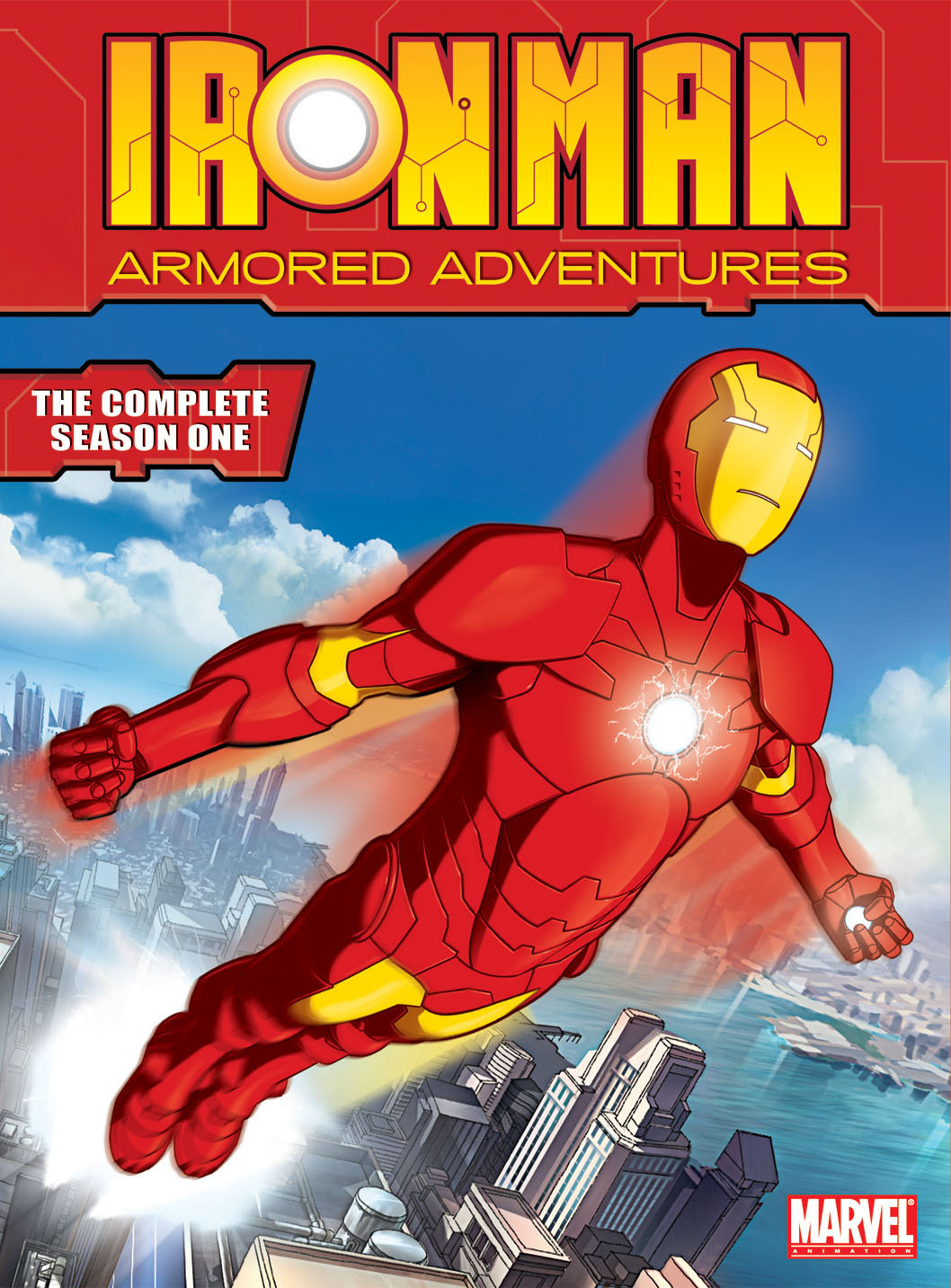 Of course there was going to be a new [[[Iron Man]]] animated series in the wake of the smash success of the 2008 movie. Marvel delivered [[[Iron Man; Armored Adventures]]], airing on Nicktoons as of spring 20098 with a second season promised this fall.  Vivendi Entertainment has also collected the entire first season on five discs, being released today, the week [[[Iron Man 2]]] jets onto screens coast to coast.

Unlike the 1994 series, also being released this week, this one has no connection to the movie reality or the comic book continuity. Instead, the team lead by showrunner Christopher Yost decided to make this an all-ages Iron Man. Possibly inspired by a storyline that reconfigured Tony Stark into a teenaged shellhead, this series introduces us to teenaged wunderkind Tony, his best pal Rhodey and hits the ground running.

In short, Obadiah Stane has engineered Howard Stark’s death and takes over the company. Tony, not yet of age, is now living with Rhodey and attending high school but accesses a hidden warehouse where he had built the Iron Man armor and uses it when its clear Stane has perverted his father’s work.

We get familiar faces in new roles with Pepper Potts as the gosh-wow female love interest and Happy Hogan as the school dumb jock. Stane, played too much like Lex Luthor rather than an original character, is saddled with a daughter. Whitney, who becomes Madame Masque in a key variation from the source material. New to the mix is Gene Khan, son of the Mandarin and desirous to replace his father, obtaining the five rings of power – one of which Howard Stark found and Stane stole.

The entire first season sets up Stark vs. Stane and Gene’s quest for the five rings of power. Along the way many of Iron Man’s classic foes are repurposed and brought in as pawns or distractions. All 26 episodes rocket us along at a quick pace ending with a cliffhanger, keeping people waiting for the second season to arrive. 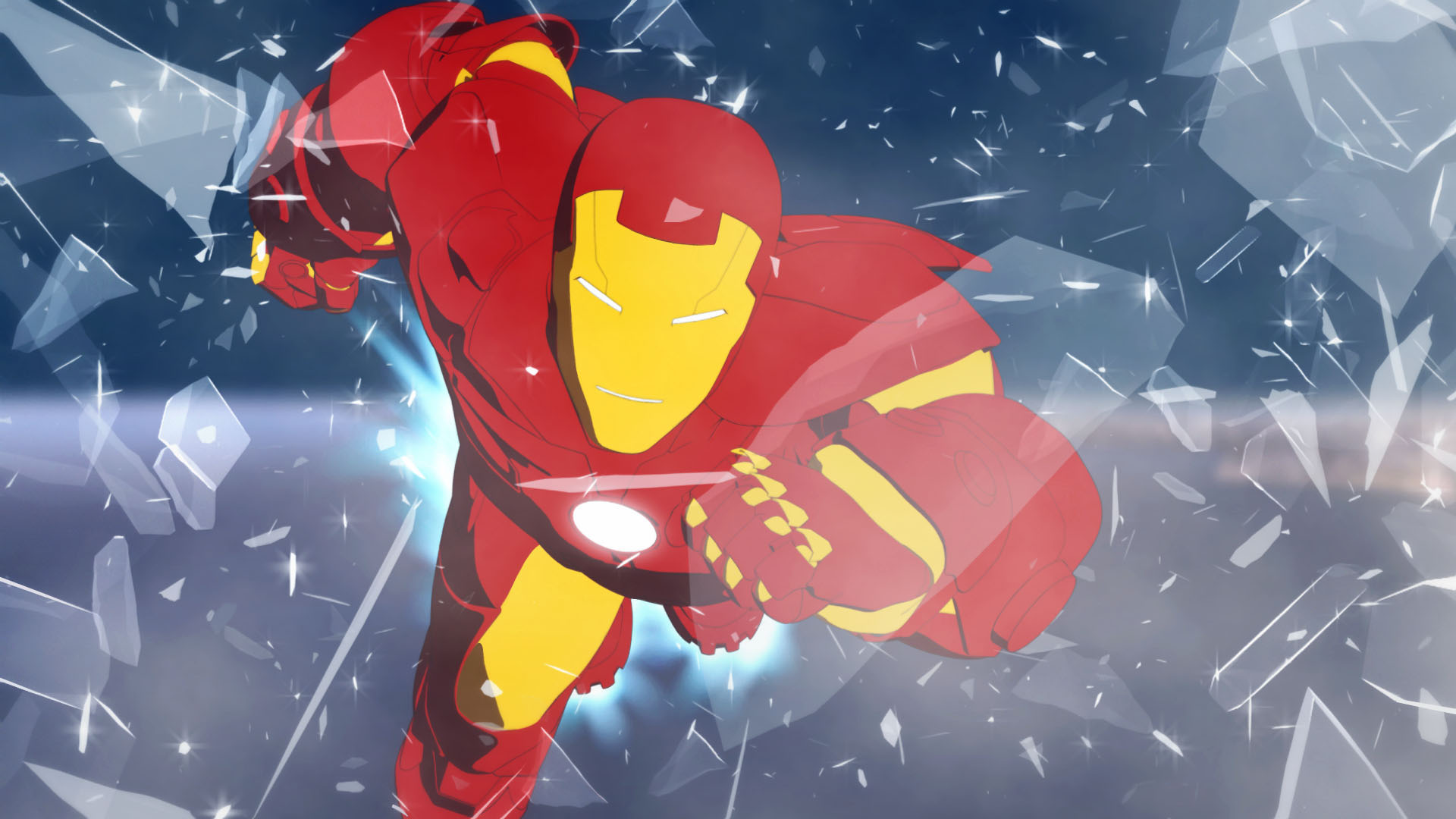 Sure, I prefer the source material since I grew up on it. But I don’t
think the young adult version is all that great. First of all, if Tony
was as brilliant as portrayed, he’d have skipped high school and gone
right to college so saddling him with high school and adolescent antics
just feels wrong and misguided. Pepper is poorly written, sounding
nothing like a teenager and reducing Happy to a stereotype annoys the
hell out of me. Other familiar names and places are twisted and strike
long-time fans as odd, such as [[[Ultimo]]] resembling [[[Ultron]]] or [[[Project Pegasus]]] being something entirely different from the comics.

I also find the Computer Generated Imagery, used to animate the series
visually jarring. Everyone is too thin and slender (except the overly
armored Mandarin, looking more like Tolkien’s Sauron than a Marvel
villain). People move in rubbery ways and their mouths, with undefined
sets of teeth, look wrong. Unlike some of Marvel’s other series, the
vocal casting is far stronger with a brand new cast of performers.
Still, the show did break Nicktoons Network’s record with over 125,000
viewers for the premiere.

While there are many things that annoy me about the show, I did find the
unfolding story oddly compelling. Of course Pepper was going to learn
Tony’s secret and does in the fifth episode so that was not drawn out.
And getting Whitney involved helps even out the male/female ratio fairly
quickly. In addition to the cadre of villains (from Crimson Dynamo to
MODOC), there are guest appearances by Black Panther, Hulk, and
S.H.I.E.L.D.  [[[The Hulk]]] story is actually nicely handled with Rick and
the Hulk in similar circumstances as Tony and Rhodey.

And if you’re wondering, War Machine arrives in time for the season
climax (along with Fin Fang Foom).

The five discs include storyboards, character sketches, and vehicle
designs giving you some nifty insight into the creative process.

While this wasn’t necessarily for me, it does have its audience judging
from the rating so you can decide if having this makes your life
complete.