Review: ‘Doctor Who The Visual Dictionary’

Doctor Who The Visual Dictionary 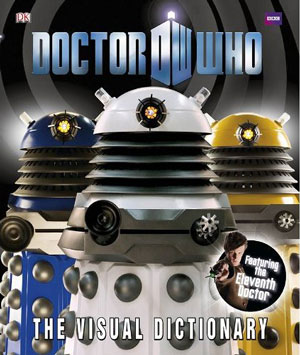 Your first thought is, why on earth are we reviewing this book when it came out last year? The answer is – because this is a brand new edition, incorporating only some of the previous edition’s material and thoroughly revised to incorporate the known exploits of the eleventh Doctor.

The problem with fact books based on ongoing franchises is that almost immediately, the facts are outdated. Wisely, this new volume covers the entirety of the fifth season of the current version of the BBC’s perennial [[[Doctor Who]]] and is being released in that fallow period between the season ending and the Christmas Special.

Interestingly, Matt Smith’s Doctor is merely an insight to the brightly colored Daleks fronting this book, which is in the traditional large DK guidebook side. The Doctor’s equipment, friends, and foes certainly deserve large pages in which to luxuriate in the minutia. And boy is there plenty of detail here. Taking a cue from the [[[ Star Trek]]] tech manuals, the multitude of authors provide pseudo-scientific explanations to how things work. We get a nice double-gatefold examining the TARDIS and now we know what each station does. Yet, the cut-aways for the new Sonic Screwdriver do not give us any idea where the readout display goes.

Visually, the book covers the five seasons beginning with the Christopher Eccleston revival, heavily favoring the current Matt Smith era. The text, however, delves through the years with some information dating back to the earliest days of the Doctor so fans of the entire series will appreciate the acknowledgment of the past.

There, of course, can be quibbles. Some 20 pages are spent on the Daleks in all their colorful glory while the Doctor and his eleven incarnations get a mere six pages. Torchwood is under-represented as is dear old Wilf.

In some cases, we learn more about the alien races here than we ever did on the series, which enriches them to a degree. The photography and layout is visually engaging and clean to comprehend which is greatly appreciated.

If anything is missing, is some sort of timeline, establishing the various eras and worlds visited by the Doctors, which probably deserves a book of its own. This is a fine collection to flip through and cherish until the next edition rolls out. You have to love the Doctor to fully appreciate this treasure trove of information but most of us here at ComicMix fall into that category. Be sure to tell Santa you want this.