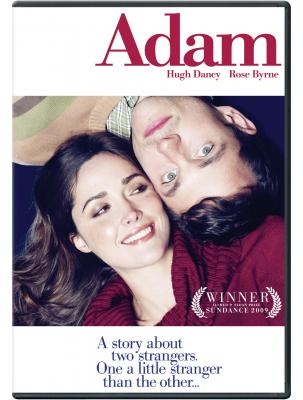 It used to be, actors could stretch by performing “ugly”, burying themselves under layers of makeup or by playing disadvantaged people such as Dustin Hoffman’s [[[Rain Man]]] or Larry Drake’s Benny on LA Law. The current favorite seems to be playing people with Asperger syndrome as popularized with Christian Clemson’s award winning work on [[[Boston Legal]]]. As with anything on a David E. Kelly series, the portrayal tended to be over-the-top or poignant and rarely anything in between.

A more authentic performance can be found on Adam

, a small movie you probably overlooked last year. 20th Century Fox released the movie in the fall and the DVD is being released Tuesday. The film stars Hugh Dancy ([[[Beyond the Gates]]]) as the title character and Rose Byrne ([[[Damages]]]) plays his neighbor. The movie won the Alfred P. Sloan Feature Film Prize at Sundance and is well worth a look.

The disorder is considered by many to be some form of high functioning autism but it means the person has difficulty “reading” people and is prone to repetitive patterns of behavior. Adam has been cared for by his father since his mother died when he was eight, but the film opens at his father’s funeral. Left alone, the only one seeming to look out for him is Harlan ([[[The Wire’s]]] Frankie Faison), Adam’s dad’s war buddy. Without him, Adam is the kind of person who would fall through the cracks in society’s safety net. While capable, Adam still doesn’t fit in well with others so he loses his job at a toy company and is left adrift.

During this time, he meets his new neighbor, Beth, a budding children’s author and school teacher. She thinks he’s cute and just a little weird, but he also opens her eyes to the wonders of the world, beginning with a tour of the universe starting with the Big Bang. When she learns of his condition, rather than be repulsed, she reads up on it and a romance begins.

While Adam struggles to find a new job and adjust to Beth being a part of his life, she is tormented by her father (Peter Gallagher) being tried for fraud, shattering her rock steady belief in him. When she needs Adam the most, he is incapable of giving her the emotional support she craves.

The film was shot in 28 days and the chemistry between Dancy and Byrne helps make the movie work. Both give solid performances and Dancy of course, shines by making Adam sympathetic and real. The movie was written and directed by Max Mayer, who ComicMix readers know from Alias

and he clearly has affection for these people but wisely avoids predictable moments, including the ending.

The movie is accompanied by a fine commentary track and the original Sundance ending among the bonuses. Five deleted or alternate scenes are included, complete with Mayer’s commentary. Of them, we see that Faison’s Harlan was trimmed from a more substantial part and it’s a shame since he helps keep things warm. Fox Movie Channel also ran a nine minute piece where the Australian-born Byrne talks about the acting craft with three college students.