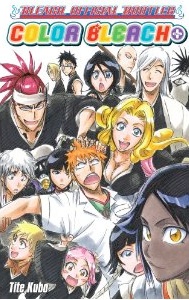 Tite Kubo’s [[[Bleach]]]
franchise is vast and never-ending, at once very
playful and utterly serious. The latest addition to it to be translated into
English by Viz Media is [[[Color Bleach:
Bleach Official Bootleg]]] (U.S., July ’10, Japan ’07). The conceit of this
jam-packed volume, presented in a sort of oversized Japanese-style trade format
with colorful dustcover and the like, is that the fans put out a tell-all book
about the world, the characters, the writer, behind-the-scenes and secret info,
and the like. The colors pop, the artwork is wonderfully exaggerated and
in-your-face like the best doujinshi
(fan-produced manga that Japanese publishers tolerate as part of the landscape
even in such a tight-rights state), and it makes fun of the thing we love, we
Bleach Bums, as only insiders can—so there are a lot of inside jokes. But if
you’re new to the franchise, you’ll still laugh out loud in spots and learn a
lot from this. It fills in a lot of gaps and previews things that haven’t yet
come out in the translated volumes (about 10 volumes behind what’s out in
Japan) or dubbed anime (about 120 episodes behind with backstory and filler
arcs resuming on Cartoon Network’s Adult Swim, starting last weekend after a nine-month
wait).

Some of the tidbits in the book, like details on all the
squad captains and their lieutenants and other seated subordinate officers,
come directly from extras on the American-release DVDs (up to Season 5, which
is Season 6 in Japan, the end of the endless filler arc of the Bounts’ attack
on the Sereitei, ending at ep. 109). Others
were bonus features in the Japanese Weekly
Shonen Jump issues where it’s serialized over there, or from our monthly
American version [[[Shonen Jump]]]. And
still others are manga-ized versions of the Shinigami
Encyclopedia anime extras that you don’t get on the Cartoon Network
versions, only on the versions aired in Japan. There are ads, faux and real,
for things such as the video games, other schwag like jewelry and accessories,
CDs and radio shows, and idol-like photobooks of your fav captains, like
fashion plates Histugaya Toushiro (Squad 10) and Kuchiki Byakuya (Squad 6)—very
popular with the otaku in Japan for
all their rock stars, and the captains certainly are treated that way by the
fans! Very amusing are the entrance exam for the Shinigami academy and personal messages from some of the stars in
full character, but with little hints of their personalities that you don’t
often see—such as running jokes about 9th Company’s acting-taichou Hisagi’s bad electric guitar playing. There are few
outright spoilers (e.g., you know that certain captains and lieutenants are
“missing,” but you don’t know why or what the outcome is…so if you haven’t seen
past ep. 60 or so in the third season, you won’t lose any of the impact of that
stunning reveal).

This is a happy bonus well worth acquiring for any fan of
the series. It amuses and informs and you’ll pick it up again and again and it
seems that the binding will hold up to repeated thumbings-through.