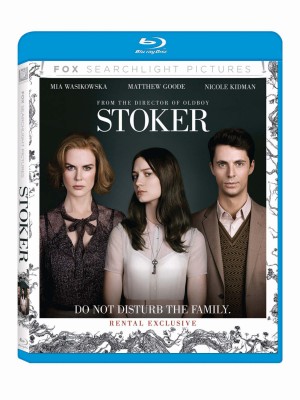 When you name a thriller Stoker, you immediately have people concluding it has something to do with Bram Stoker, author of Dracula, and therefore maybe the movie involves vampires. The film’s characters address that at one point but let’s stipulate that there are no members of the undead here. Instead, we have a stylish, noirsh film that marks a mostly successful American debut for Korean director Chan-Wook Park. Starring Mia Wasikowska, Nicole Kidman, and Matthew Goode, it’s an uncomfortable story of family.

India Stoker (Wasikowska) has just lost her father, shattering their close bonds. Distraught, she is withdrawn, and initially shrinks further within Goth herself when Uncle Charlie (Goode) turns up and comes to live with her and her mother Evelyn (Kidman). In her eighteen years, India has never heard of an Uncle Charlie and more, what she begins to hear strikes her as fantastic and contradictory. Is he a rich adventurer, an ex-con, an opportunist? Maybe all of the above. But, as Charlie insinuates himself into their Tennessee home, life changes.

India is uncomfortable around Charlie until his charismatic personality begins to change how she acts and more, how she sees herself. There’s a hint of sexual desire pouring forth while her own mother, dealing with the loss in her own way, seems equally drawn, making dinner time more than a little awkward. There’s a piano duet that is nicely sexually charged and the film is filled with visual metaphors that make this a cut above most thrillers.

Wentworth Miller’s script was inspired by Alfred Hitchcock’s Shadow of a Doubt down to naming the mysterious stranger Uncle Charlie. There are plenty of structural ticks Miller picks up from the old master, successfully maintain the tension throughout the 99 minutes. Unfortunately, like Hitchcock, the characters are cold, never quite warming up to one another or the audience and undercuts the movie’s impact. And trust me, this film has plenty of impact, especially when things get violent and here Park exceeds Hitchcock, bringing his natural talents to the fore.

The performances are strong and should have been stronger and this might be a culturally issue as Park works with his Australia/English cast in an American setting. Goode (Watchmen) is nicely creepy while the women vie for coolest character.

This is a strong transfer to Blu-ray, out this week from 20th Century Home Entertainment. Cinematographer Chung Chung-hoon’s imagery is well preserved, letting the atmosphere ooze into your home. The matching audio allows you to enjoy the splash of rain, the crack of a hardboiled egg and the eeriness of Clint Mansell’s excellent score.

The disc, which comes with an Ultraviolet digital copy, contains a handful of extras. There are three deleted/extended scenes (10:01), none of which are really missed; Stoker: A Filmmaker’s Journey (27:50), a Making Of mini-documentary that is cut above others of its ilk; Photography by Mary Ellen Mark (11:15), on-set photographs that can be auto-played or manually advanced;

London Theater Design (2:35), showing how a London theater was transformed for the film’s premiere; and,  Theatrical Behind-the-Scenes, seven short featurettes that were repurposed from the documentary and rehashes that material. You also get the theatrical trailers.