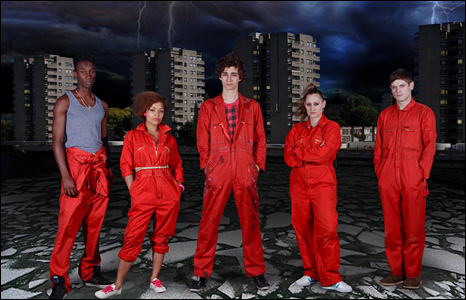 Imagine if you will, being a teenage juvenile delinquent who suddenly acquires super powers. What would you do? The writers of [[[Misfits]]] (originally aired on E4 in late 2009, and now available on DVD via Amazon UK) obviously spent a lot of time considering this. The show follows five young people who have been sentenced to community service. A freak storm imbues them all with different powers. Each of the characters is trying to come to grips with his or her own new abilities while still dealing with the regular life issues that they experience every day. As this is a British program, the language and visuals are far more racy than American broadcast TV, and seems to fit genuine teenage behavior more accurately as a result.

Viewers might initially have to adjust to the shocking and rather obnoxious behavior of Nathan (played by Robert Sheehan), a young man who seems to act out to get attention after feeling neglected and ignored by his parents, but he grows on you as his character develops. Kelly (Lauren Socha) has some anger management issues triggered by the fact that people tend to make snap judgments and classist remarks aimed at her. Beautiful, spoiled daddy’s girl Alisha (Antonia Thomas) goes out of her way to ensure that every male present is fantasizing about her, and is especially interested in capturing the attention of Curtis (Nathan Stewart-Jarrett), a track star whose mistakes destroyed his chance for the Olympics and who is being punished heavily as an example. The fifth member of the group is Simon (Iwan Rheon), a socially awkward techno-geek who enjoys filming everything going on in the world around him.

While the standard setup for supers is to have a battle between Good and Evil, Misfits explores the way most people would realistically respond to such a situation. Everyone’s actions and motivations (and powers, which I will not spoil here) match his or her own personality and situation. Each episode presents a new challenge with the powers while regular situations are also being hashed out. For those viewers who like to see romantic situations explored, you will not be disappointed, either. Misfits is fun, fast-paced and well thought through – and more than a few scenes will leave most audiences rolling with laughter while still providing plenty of food for thought.

Misfits also has a great amount of supplemental material online. Each of the main characters has his or her own Twitter feed. Viewers were able to get real-time tweets while watching episodes when they originally aired. While some of the web content, especially that for Kelly, is heavily stereotyped, there are some real gems. The character of Simon spends most of his free time at home online and editing the videos that he films during the day. I was pleasantly surprised to find that Simon has his own YouTube page, with the videos we see him filming throughout the season (note: Spoilers!). Each of the characters apparently also has a Facebook page (though there are too many to tell which ones are official). It was a really nice touch to have those extra tidbits available online, and they helped make already three-dimensional characters seem all the more real.

It has been reported that Misfits has been picked up for a second season, owing to critical acclaim and an impressive viewership. Although the show is not currently available on BBC America or Hulu, it seems logical that it will find its way there soon. Let’s just hope the US networks don’t decide to try and create an Americanized version, because something this awesome should not be messed with.