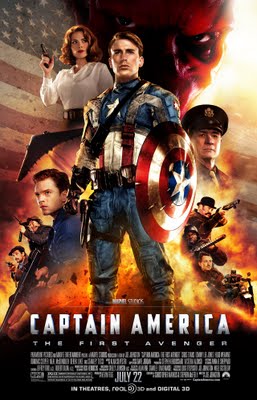 2011
Marvel Studios/Paramount Pictures
Directed by Joe Johnston
Produced by Kevin Feige
Screenplay by Christopher Markus and Stephen McFeely
Based on “Captain America” created by Joe Simon and Jack Kirby
Before we get into the review, please indulge me for a minute…hit it:
I had hopes that when Jon Favreau snuck in the 1960’s Iron Man theme song, they’d find a way to do it in other movies based on Marvel superheroes.  Such was not the case.  “Star-Spangled Man” was okay, but it can’t beat this song.  Maybe in the sequel.  And I have no doubt that there will be a sequel as CAPTAIN AMERICA is in my head, fighting “Iron Man” and “Thor” as the best Marvel superhero movie made to date.  Joe Johnston doesn’t get a single thing wrong in this movie which is actually two movies in one: it’s not only a superhero movie but it’s a World War II movie as well and never to the two elements clash with each other.
4F Steve Rogers (Chris Evans) tries time and time again to enlist in the U.S. Army as he desperately wants to do his part and fight the Nazis.  But his list of physical aliments prevents that until chance puts him in the path of Professor Erskine (Stanley Tucci).  The professor left Germany to willingly work for the United States on his greatest experiment: The Super Soldier Serum which can transform a man into the perfect human.  Erskine wants to try his serum on Steve as he is impressed with the man’s heart and compassion.
Colonel Phillips (Tommy Lee Jones) the head of the Super Soldier Project isn’t so sure this scrawny specimen is the right man.  But Agent Peggy Carter (Hayley Atwell) of the Strategic Scientific Reserve agrees with Erskine and the experiment goes ahead.  Steve is endowed with enhanced strength, reflexes, heightened senses and a metabolism that heals him at a faster rate than normal.  Tragedy dims the success of the project and as a result Steve is regulated to being used a mere publicity tool to sell war bonds, going on USO tours as ‘Captain America’ dressed in a gaudy red, white and blue costume.
But over in Europe, the war isn’t waiting for Steve.  Johann Schmidt (Hugo Weaving) is the head of HYDRA, a separate organization within the Nazi party dedicated to developing advanced weaponry for its own purposes.  Schmidt is also known as The Red Skull, due to an unfortunate side effect of Erskine’s Super Soldier Serum which he took himself.  Along with his chief scientist Arnim Zola (Toby Jones) The Red Skull has his own plan of world domination that doesn’t involve Hitler.
Things really kick into high gear when Steve, fed up with being treated as a joke, goes on a one-man rescue mission behind enemies lines to rescue his best friend James Buchanan ‘Bucky’ Barnes (Sebastian Stan) and over four hundred prisoners of war, including a bunch of fightin’ fools known as The Howling Commandos (Neil McDonough, Derek Luke, Kenneth Choi, Bruno Ricci and J.J. Field).
Captain America, now a front line soldier with Bucky and The Howling Commandos backing him up as well as a new protective uniform and shield developed by genius inventor/industrialist/futurist Howard Stark (Dominic Cooper) is regarded as a genuine real American hero.  His battles are rapidly becoming the stuff of legend.  But it’s a legend that may be cut short when he finally confronts The Red Skull…
There are so many things that CAPTAIN AMERICA gets right I could easily take about an hour listing them.  Elements of the origin are moved around but the spirit of the character is intact.  Chris Evans finds exactly the right note for Steve Rogers/Captain America and never strays from it.  Just like when he played Johnny Storm/The Human Torch in the two “Fantastic Four” movies, I get the impression that he took the time to read the comics.
The only problem I have with Tommy Lee Jones is that his character wasn’t named “Happy Sam” Sawyer since to me that’s who he’s playing.  Neil McDonough is absolutely scary in how much he looks like “Dum Dum” Dugan.  And he sounds exactly like I always heard Dugan’s voice in my head while reading those “Sgt. Fury” comic books.  The changes in the relationship between Steve Rogers and Bucky Barnes is one I thought made that relationship even stronger.  I really liked how Tony Stark’s dad got in on a lot of the action and we get to see a lot of where Tony gets his swagger from.  Hugo Weaving and Toby Jones make for an effective pair of bad guys and Hayley Atwell steals every scene she’s in as Peggy Carter, a woman definitely ahead of her time.
But the star behind the scenes is Joe Johnston who I’ve been telling you folks for years now is a genius.  Hopefully the success of CAPTAIN AMERICA will cause people to finally acknowledge “The Rocketeer” as the masterpiece it is.  And “Jurassic Park III” and “The Wolfman” ain’t bad either.
So should you see CAPTAIN AMERICA?  Are you kidding me?  What are you waiting for?