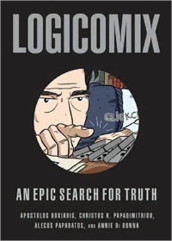 Logicomix: An Epic Search for Truth

Ever so often, there’s an object lesson that proves the saying so many of us like to make: that comics aren’t just for adventure stories, that they’re suitable for any kind of story. If we’re lucky, those paradigm-breakers are also really successful – and [[[Logicomix]]] is both of those things. It’s a major graphic novel on an unexpected topic – the life of Bertrand Russell, with a strong emphasis on his work attempting to create a solid foundation for mathematics, and thus all of learning – and it’s been quite commercially successful, alighting on bestseller lists occasionally and moving a surprising number of copies.

Logicomix, though, is also a piece of metafiction – the first character we see, on the first page of this graphic novel, is co-author Doxiadis, talking to the reader about this very story, and introducing us to co-author (and logician/computer science professor) Papadimitriou, and then to the art team, Papadatos and Di Donna, and their researcher, Anne. The authors and illustrators return to the stage – very literally, in one case at the end – several times in the course of the graphic novel, mostly to explain the details more carefully, and, occasionally, to lightly debate with each other about the meaning and import of the story.

After that bit of throat-clearing, Logicomix starts up in earnest…with another frame story, in which Bertrand Russell arrives to speak on logic at an unnamed “American University” on the eve of WWII, in 1939, and finds himself interrupted by protestors who want him to stand up unequivocally for pacifism, as he did during The Great War. Russell instead launches into his speech, which forms the narration boxes – and occasional interludes – for the rest of the graphic novel, as the panels depict first Russell’s youth and then his early mature years, as he worked on the foundations of logic.

Any story so carefully, and recursively, framed needs to be strong and resonant to support the weight put on it, but the story Logicomix tells takes place almost entirely in Russell’s head, and it’s very abstruse and intellectual. Doxiadis and Papadimitriou do dramatize many of the events of the first two decades of Russell’s adult life, including his first marriage and his flirtations with Evelyn, the wife of his great collaborator, Alfred North Whitehead. But the bulk of Logicomix is made of up scenes of Russell thinking and talking, as he chips away at the assumptions of prior logic – or learns of the destruction already caused by earlier thinkers like Cantor, Frege, and Hilbert – and then talks vaguely of his work attempting to form a permanent, unshakable basis for all mathematics in his and Whitehead’s unfinished [[[Principia Mathematica]]].

But then Kurt Gödel comes along, and, with his Incompleteness Theorem, proves that what Russell has been trying to do is not just difficult, but logically impossible – that any system of axioms complex enough to support arithmetic must by necessity contains axioms that can never be proven within that system. Thus, Russell’s “search for truth” was in vain – there can never be an utterly solid basis for a single mathematics.

Logicomix casts its story as a “quest” to avoid the vague sense of pointlessness that could have descended at this point, and the reader does feel for and empathize with Russell throughout the book, even if his actual theories – even the simplified versions presented here – are, as I mentioned above, completely and utterly separated from normal life, and even the parts of logic and philosophy that armchair enthusiasts care about. Russell’s mania was the end of a long process in logic and math, and was very exciting at the time to those who could follow the argument. Doxiadis and Papadimitriou capture some of that excitement and urgency, though they also tend to obscure the intellectual excitement with all of their framing devices.

Logicomix becomes clearer in retrospect, particularly if the reader works carefully through the backmatter “Notebook,” which gives thumbnail sketches of the important figures and theories in the history of logic and the foundations of mathematics. And it’s an amazing achievement for a three-hundred-plus page comic book about Bertrand Russell to be this engrossing in the first place, let alone as successful as it has been. In the end, it may just prove the tautology that to be popular, you need to popularize – Logicomix is a popularized version of this story, gaudied up with hints of Russell’s complicated love life, talk of “madness and logic,” and the looming specter of WW II. But, at its core, it is the story of the search for absolute mathematical truth, and that’s an impressive ambition for a graphic novel.