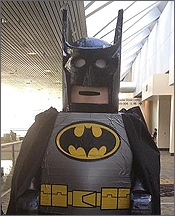 I like comic book conventions, although I’ve been pretty hard on them lately. These days most conventions have little to do with comic books. They have a lot to do with pop culture and celebrities and movies and autographs and promotion, but over the past decade or two comic books have become the ugly stepchildren within their own temples.

Except for a handful. Mid-Ohio Con has been consumed by the dreaded Wizard ogre; that one used to be a favorite. HeroesCon in North Carolina is high on my list of the exceptional; I wish I could get there each year. There are plenty of great small shows, usually held in hotels and attracting people from about a 200 mile radius, if the weather is agreeable. And, as I’ve incessantly proselytized to the annoyance of thousands, my absolute favorite: the Baltimore Comic-Con.

Second, it’s only two days: Saturday and Sunday. The burnout rate is low and people tend not to leave as early on Sundays. You can get as much done in those two days as you can elsewhere in three… or four. Third, the staff is well-trained, efficient, and so damn polite if you’re from New York your skin just might peel off in strips.

I’m happy to say I’ve got a hell of a lot of friends who go there. It’s one of the few shows Timothy Truman attends. Mark and Carol Wheatley both put me up and put up with me year after year; my daughter and ComicMix comrade Adriane Nash gets to stay in Mark’s breathtaking library and studio. Marc Hempel joins us at the Insight Studios booth. Great folks like Gene Ha, Brian Bolland, Amy Chu, Andrew Pepoy, Denis Kitchen, Jack C. Harris, Walter and Louise Simonson, Joe Rubenstein, Larry Hama, Matt Wagner, John K. Snyder III … we don’t have the bandwidth to name a tenth of the people I hang out with at the show. Even the (fairly) recently liberated Paul Levitz showed up as a freelancer.

Better still, the ambiance of the Baltimore Comic-Con allows me to make new friends, something that’s almost impossible to do at the largest shows like San Diego, New York, and Chicago. This year I was exceptionally lucky, spending memorable time with Phil LaMarr and Ross Richie.

ComicMix was there in full-force: Vinnie Bartilucci, Glenn Hauman, the aforementioned Adriane Nash, Emily S. Whitten, and the non-alphabetical Marc Alan Fishman – who was there with the rest of the Unshaven Comics crew, Matt Wright, and Kyle Gnepper, where they managed to sell out of their excellent indy comic, Samurnauts.

Probably the highlight of the Baltimore show each year is the Harvey Awards dinner, and this year was no exception. Phil LaMarr served as master of ceremonies, keeping the three and one-half hour show moving while keeping the audience in stiches, Ross Richie delivered an inspiring keynote address, and as usual Paul McSpadden did his usual amazing job coordinating the whole event.

The Hero Initiative honored Joe Kubert with its Humanitarian of the Year award – a decision made before Joe’s passing last month – and Dr. Kevin Brogan delivered a moving tribute to the late cartoonist and educator. As it turns out, Joe left us one more graphic novel. Their annual Lifetime Achievement Award went to John Romita Jr., in a presentation made by the team of Stan Lee and John Romita Sr.

I particularly enjoyed seeing Marc, Kyle and Matt there for the first time – being sequestered in that room with most of the above-mentioned folks as well as with Stan Lee, John Romita Sr. and Jr., Mark Waid and so many others seemed like a heady experience for our pals, who, I think it’s safe to say, were in fanboy heaven. Pretty damn cool. I’m proud to say our own Glenn Hauman helped in the IT end of things, and ComicMix joined Insight Studios, DC Entertainment, Boom!, Comixology, Richmond Comix and Games, ComicWow!, Painted Visions, Bloop, Captain Blue Hen, Cards Comics and Collectibles, and Geppi’s Entertainment Museum as sponsors.

And I managed to sign up a new columnist for this site. I mentioned the name above somewhere (good hunting), and this person will start out as soon as we iron out scheduling issues and the usual start-up stuff. I’m very excited about this, and you will be too when you read this person’s stuff.

We also went apeshit covering the cosplay scene. Adriane posted about 100,000 pictures on our ComicMix Facebook page, all to the obvious enjoyment of the masses. We’ll be expanding our cosplay coverage considerably, while at the same time polishing our alliteration.

On behalf of the whole ComicMix crew, I want to deeply thank Marc Nathan and Brad Tree for once again putting on the best show in comics, and to thank my dearest of friends Mark and Carol Wheatley for being our personal sponsors. We-all had a great time!