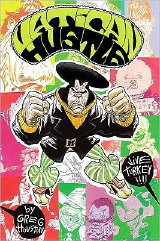 There are stories that are inextricably mixed up with their original media, stories that would make very little sense translated into another form. Imagine a Gothic Romance novel as a puppet show, or a John Wayne Western as an opera. Until the moment I opened this book, I thought “[[[Blaxploitation]]] movie as a comic” was another example.

(I’m not completely sure I’ve been convinced otherwise, either.)

[[[Vatican Hustle]]] is a Blaxploitation movie done as a comic – when it’s not being a parody of a Blaxploitation movie, or vaguely wandering off into Chester Gould territory, or just being terrifically proud with and impressed by itself. If the art style – fairly well described by the publisher as “a hilarious mash-up of Ralph Steadman, Basil Wolverton and Chester Gould’s bad guys,” though that misses Kevin O’Neill, whom I’d list first and foremost – doesn’t tip you off that this is wacky with a capital Wack, the fact that the hero is named Boss Karate Black Guy Jones will certainly do the trick.

It’s set in Baltimore, in an unspecified time that could be the ‘70s as well as today, and our hero – whom I will refer to as BKBGJ for brevity – is, of course, a black dick who’s a sex machine with all the chicks. (Literally – the book begins post-coitally, with BKBGJ walking his latest conquest to the door and chatting about his “shorty robe” before dealing with the inevitable arriving gangsters who arrive to take him, by force if necessary, to see their boss.) BKBGJ is the absolute best, feared and respected even by the mob, and so is hired by that mob boss to retrieve his beloved runaway daughter before her boyfriend uses her in donkey porn.

The trail leads to Rome – as the title implies, or promises – and to the Pope. The Pope is also a tough guy: hard-drinking, hard-living, perhaps the only man in the world who can stand up to BKBGJ. But that implies much more of a linear plot than Vatican Hustle provides – this is a loose-limbed book, sprawling in all directions in search of laughs or snickers from clowns with leprosy, “theme hobos,” dive bars, Gould-level deformed faces, and anything else Houston can think up and throw in.

Vatican Hustle isn’t consistently funny – not even in the places where it’s deliberately trying to be funny. But it is consistently weird, and Houston either has no fear or no filter – and whichever one it is, it makes for a succession of bizarrely fascinating pages. This is definitely the work of a unique talent, and there isn’t anything else like it. I’m not sure whether to hope that Houston settles down and learns to modulate his talent to consistently replicate his hits and avoid his misses, or to expect that he’ll get even more extreme and bizarre. Either way, Vatican Hustle is like no other book you will read this year, and that’s damn impressive.