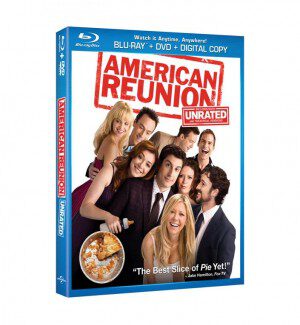 Great film comedies have memorable characters and incidents, usually showing a knack for brilliant casting, and covering turf previously untouched. In 1999, American Pie did all of the above and was a wonderfully funny bit of fluff. It gave us some fine performances, including a resurgent Eugene Levy, the bit with the apple pie, made band camp sound cool, and of course Shannon Elizabeth’s swell nakedness.

The sequels that followed, both theatrical and direct-to-video tried to cash in on the craze but merely retread familiar turf and got less and less funny. Poor Levy would back the truck to the bank to unload all the cash he got to make appearances to at least somehow connect the series together.

However, here we are nine years after American Wedding with American Reunion and it suddenly feels familiar and fresh at the same time. This time around, writer/directors Jon Hurwitz and Hayden Schlossberg, allow the original characters to age so we’re perfectly okay with revisiting them. It’s always good at a reunion to see who got fat, who lost hair, who has succeeded and who has never changed and we get that and more here.

While the storyline announces it’s been thirteen years since high school graduation, putting the characters at 31 or so, everyone looks way too old to be convincing, a danger of casting 20-somethings to play teens. So, what’s everyone been up to? Jim Levenstein (Jason Biggs) and Michelle (Alyson Hannigan) have the most interesting dilemma: married and deeply in love but burdened with jobs and an infant so their sex life is nonexistent, except in private, solo moments. Chris “Oz” Ostreicher (Chris Klein) is the most successful of the bunch, a sportscaster who gained national attention for appearing on a dance show. And then there’s Stifler (Seann William Scott), who has a lifetime subscription to the Peter Pan Syndrome and is drifting through life. 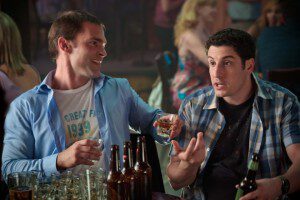 The gang, with new significant others, arrive for the reunion and everyone reverts to form, including Oz, who sees his ex, Heather (Mena Suvari), and is smitten all over again.

Time has passed, though as we see Levy now a widower still mourning his wife’s death while next door neighbor Kara (Ali Cobrin), who Jim used to babysit is now a gorgeous hot to trot 18 year old. It’s Kara who gets to have the memorable nude scene this time around and they cast well since she’s gorgeous and nicely handled the comedic aspects.

All the old gang including Kevin (Thomas Ian Nicholas), Finch (Eddie Kaye Thomas), Finch’s Mother (Jennifer Coolidge), John (John Cho), Vicky (Tara Reid). And others reprise their roles. Newcomers include Dania Ramirez as the ugly duckling turned into hot swan. As a result, all the old feelings, jealousies and behaviors are brought to the fore in interesting ways. It’s far from brilliant and mostly predictable, robbing the fourth film, out Tuesday from Universal Home Entertainment, of being spectacular. The funniest fresh bit may well be Oz losing the dance competition, hosted by Neil Patrick Harris in a nice cameo, to Gilbert Gottfried. 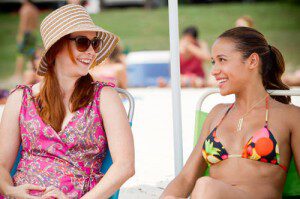 Like walking into the kitchen and the aroma of Mom’s fresh apple pie and being catapulted back to happier, simpler times, this film is a welcome addition to the series and a good chance to see familiar faces who don’t visit often enough.

The transfer to Blu-ray is well handled so the visuals and sound are sharp, not that the film needs either to be entertaining. The Combo Pack comes with Blu-ray and DVD both sold separately, plus an ultraviolet code. The Blu-ray comes replete with 12 bonus features and a commentary. The DVD has some of the features plus the commentary. Although sold as a package with the theatrical and Unrated version, there’s a minute that separates them so blink and you miss it.

Among the extras is a 10:32 “Reunion Reunion” which is all surface and the gag reel is surprisingly tame. Funnier is the “Ouch! My Balls” featurette focusing on the amount of crotch punching the film relies on. Of the handful of deleted scenes only one with Stifler is missed since it sets up the conclusion of his arc. Dancing with Oz and Hangin’ with Jason B are so-so pieces. Clearly the effort was to be funny on the feature itself. The best of the lot is the interactive yearbook where you can  select a character and trace their history across the franchise with clips, cast discussions , their most embarrassing moment and their favorite activities.