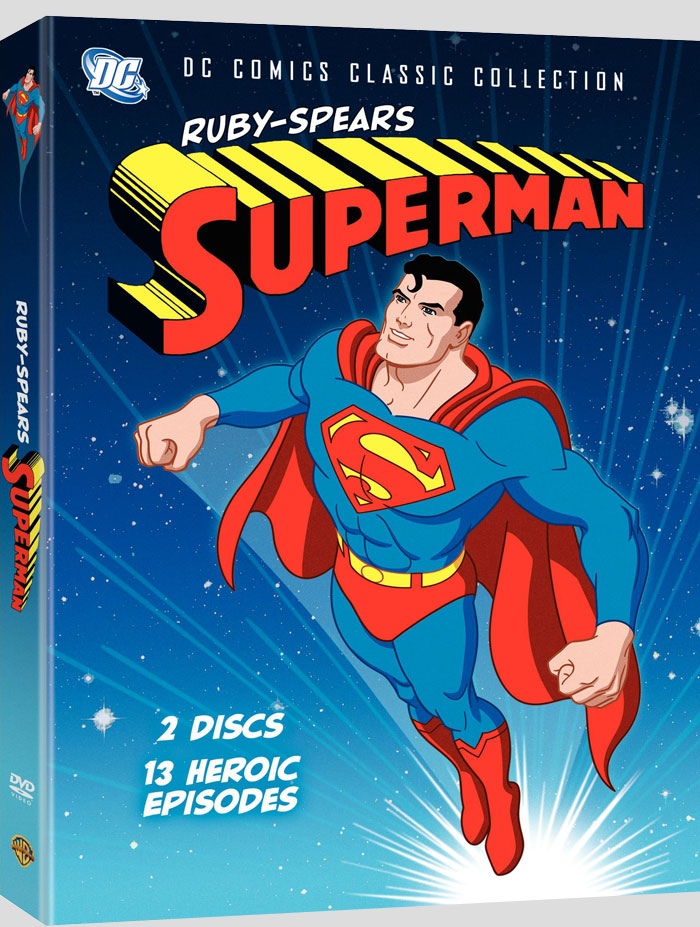 Superman]]] did not do well as an animated series despite three different studios attempting to tell his stories. Filmation debuted as a competitor to Hanna-Barbera with the 1966 Superman series then H-B told their stories in [[[Super Friends]]]. It seemed they didn’t fully know how to challenge someone with the amazing powers.

By the late 1980s, Ruby-Spears was a well established company, best known for their [[[Thundarr the Barbarian]]]. In 1988, it was their turn to try their hand with the Man of Steel and tomorrow, Warner Home Video releases Ruby-Spears Superman

, a two-disc set collecting the thirteen episodes from the one season series.

This series came out just two years after Superman had been revamped from top to bottom by John Byrne and Marv Wolfman in the pages of [[[Superman]]], [[[Adventures of Superman]]], and [[[Action Comics]]]. Most of the changes from the comics are not reflected here, the exception being Lex Luthor as a business tycoon scheming to rid the world of Superman.

However, the producers clearly weren’t comfortable with this interpretation so borrowed heavily from the just completed film series. As a result, the Luthor here is not at all a threat and saddled with a dumb blonde, Jessica Morganberry, for a confidant rather than the more interesting, and far deadlier, Hope and Mercy.

Marv Wolfman was the story editor, chosen not because he helped craft this modern day version of the mythos, but based on his other animation credits. He surrounded himself with like-minded professionals including Martin Pasko and Steve Gerber (who may have written the best of the episodes) and got to work. Visually, the series was a cut above its predecessors thanks to the involvement of Gil Kane, no stranger to Superman. It’s fun seeing Kane’s unique designs come to life, if only more of his touch were evident in the main characters.

The characterizations for Clark Kent, Lois, Jimmy, Perry, and the Kents is virtually non-existant which undercuts much of the emotional impact of the stories. The threats, whether from the benign Luthor or extraterrestrial sources, are also largely unimaginative. Why his rogues’ gallery is absent is never addressed and again, that robbed the series of better stories. Wonder Woman guest stars in one episode and she’s diverting but not at all majestic or riveting to watch. Instead, we have tales that sometimes defy story logic or the laws of (comic book) physics.

From an animation standpoint, the series suffers lapses when characters stand in front of oncoming energy blasts or runaway trains when they should be in motion. The voice casting is off for most characters and is unmemorable. This is far from Ruby-Seaprs’ finest moments.

The most interesting aspect of the series is that each episode concludes with “The Superman Family Album”, four minute vignettes in chronological order, detailing Clark Kent’s journey from adoption through the first time he donned his costume. Unfortunately, all the heart-warming elements we loved from the previous incarnations are gone. Instead, Clark is an impatient brat who demonstrates his powers without ever once being taught about the responsibility that comes with them. We jump a few years and he’s suddenly more mature if no less patient, and we never see the lessons the Kents imparted that made him the World’s Greatest Super-Hero. In her introduction, Lana arrives as a blonde, and her relationship with Clark is given short-shrift. Similarly, Lois’ introduction to Superman is badly handled and devoid of emotion. A great idea, terribly wasted with poor creative choices.

The 13 episodes look nice, and the soundtrack, inspired by John Williams, is a cut above but overall, they are less than wonderful adventures.

The box set comes with one unique extra: “[[[Corruption of the Corrupt: The Rise of LexCorp]]]” which attempts to place Luthor’s comic book characterization into the context of the times. Educators and authors along with Superman editor Mike Carlin contribute their thoughts and it’s somewhat engaging, but has little to do with the animated series, certainly it has no resemblance to the Luthor depicted here.