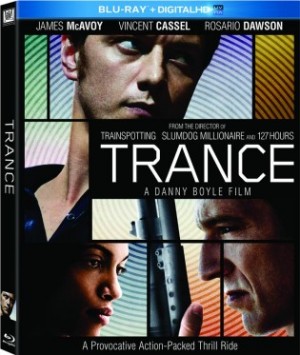 Director Danny Boyle gets credit for never repeating himself. In a short retrospective contained on the newly released Trance Blu-ray, he talks about the appeal of each film and how making them has continually surprised him. He had read the Joe Ahearne script for Trance years earlier and it stayed with him and he finally shot it. Then let it marinate in Post Production while he mounted the incredible opening for the most recent Olympics.

Ahearne wrote the script back in the 1990s and first showed it to Boyle after he shot Shallow Grave and the concept lingered. It is also partially based on the eponymous British television series. Boyle’s frequently collaborating John Hodge stepped in to rework parts of the script and then it was finally made last year.

The movie is many things but never dull and demands your attention. What appears to be a basic art heist caper film rapidly shifts into a psychological, film noir, femme fatale thriller. As the story revolves around Simon (James McAvoy), criminal Franck (Vincent Cassel), and hypnotherapist Elizabeth (Rosario Dawson). You watch the film never quite sure who the focal point character is or who to root for. What becomes clear by the midpoint is that everything revolves around Elizabeth and Dawson’s cool, riveting performance.

Unfortunately, unlike his earlier works, none of the characters really feel like real people. They are closer to archetypes performing for an indecisive puppetmaster. Boyle gleefully is playing with reality here and you’re left reeling, trying to follow the chaotic timeline especially as new revelations make you question what you already understood.

Simon turns out to be complicit in the art theft but cannot remember where he stashed the $27 million painting so it falls to Elizabeth to coax the secret out of him as Franck paces, seething at being deceived. As Simon fixates on Elizabeth and not the painting, you think you have a romantic relationship but there are secrets within secrets and few things turn out to be what you expect. 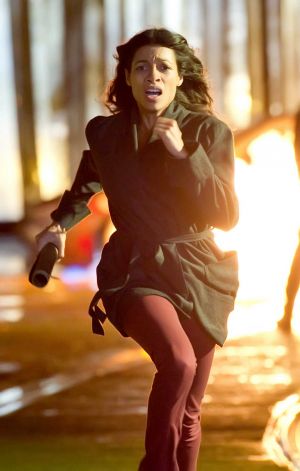 Elizabeth appears to be brought in specifically to unlock Simon’s psyche but it becomes far more than that as she delves deeper than she intended and becomes the object of his desire. She needs to control him to find the painting but it also means she has to expose herself in ways that could spiral out of control. Watch her demeanor, her outfits and notably her hairstyle to help keep track of where in the story you are and what her goals are. In the most talked about sequence, she comes to Simon completely naked, fully nude and exposed, having shaved herself for him, placing herself at his mercy all to get what she needs. But wait, when did she know he wanted her this way?

It’s heady stuff and Dawson’s bold, brave, bare performance is fascinating to watch but really, there’s no character to root for, no one to sympathize with as your expectations are regularly overturned. As a result, you’re left feeling wrung out, much like a Christopher Nolan or Darren Aronofsky film, but somewhat lacking in passion.

The movie benefits from mesmerizing scenes and art direction, top-notch cinematography, and nothing but uniformly excellent performances. All that was really missing was the same heart and soul that Boyle’s other protagonists have displayed. It transfers wonderfully to Blu-ray with both the audio and video playing well at home.

There are Deleted Scenes (16:33) that are incredibly short and two lengthier ones that don’t change the sense of unreality; the aforementioned Retrospective (14:56), and a multiple part Making Of (33:59) that unlocks some of the thinking behind the movie. Additionally and inexplicably, we also get Eugene (13:07), a short film from Spencer Susser. Apparently, his script was entered into a contest sponsored by Westin Hotels, Intel and Roman Coppola. It was one of four winners and was shot. Why it’s here goes without explanation but it is highly entertaining and worth a look.