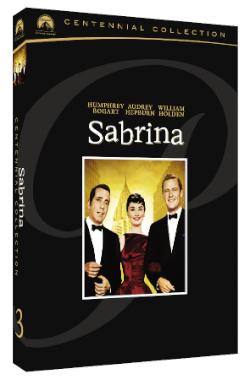 As a Humphrey Bogart fan, I was exposed to the delight that is [[[Sabrina]]] back in high school and fell in love with the romantic comedy.  It has held up to repeated viewings through the years and makes you wonder why Paramount ever bothered to remake it.  If you forget, it starred Harrison Ford and was atrocious.

Instead, if you’re unfamiliar with the story hie thee to the store and buy the Centennial Collection edition, which is number three in a new series from Paramount Home Video. The two disc set is a treat.

First, you get the story set in East Egg, I mean Great Neck, when it was where the high society lived in the first half of the 20th century.  They were tended to by a full staff, many of who, lived on premises including the chauffeur’s daughter, Sabrina, played with wide-eyed charm by Audrey Hepburn.  Her father tends to drive Linus Larrabee (Bogart) to the New York offices of the family business. Linus works all day and worries about the company all night, never seeming to have fun.  His opposite is his younger brother David, played by William Holden.  He’s all carefree and never thinks about the business, just spending its profits.

Sabrina has just returned from cooking school in Paris and the time away has done her a world of good.  She looks older, more mature, and a different girl entirely so the Larrabees all have trouble recognizing her. She, though, continues to have only eyes for David, who is presently engaged, not that that stops him from encouraging a flirtation with “the chauffeur’s daughter”.  To keep David focused on the impending wedding; Linus begins spending time with Sabrina.  The rest, as they say, is magic.

Interestingly, depending upon which featurette you watch, Bogart either did or did not want to be in the film but certainly was beloved for taking on the part. The extras celebrate a social world that is long gone in Sabrina’s World then a long look at the wonderful supporting cast that enriched this and so many others films of the 1940s and 1950s.

The [[[Audrey Hepburn: Fashion]]] Icon feature looks at how the film turned Hepburn into a fashion icon and spotlighted Hubert de Givenchy’s designs. Although Edith Head got all the credit for the film, Hepburn’s lifelong devotion to Givenchy paid dividends.

Holden gets the full bio treatment in a 24 minute mini-documentary and the [[[Behind the Gates]]] feature this time looks at the camera. Paramount in the ‘50s makes it third appearance in the series and the disc is rounded out with stills and trailers.

These first three films in the series celebrate all that was right with Hollywood i the 1950s when movies could be smart, looked good, and were well acted.  And in every case, they were about something while providing entertainment.