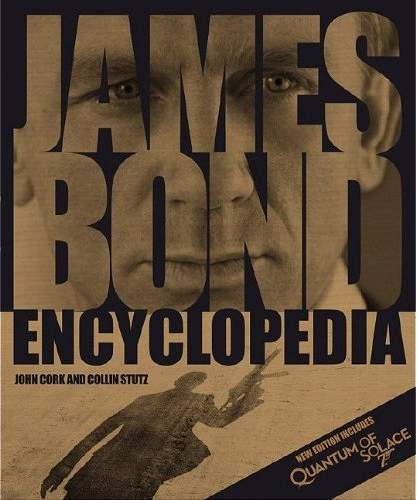 Nobody does it better. DK Publishing continues to put out the best assortment of visual reference books on pop culture and as we near the holidays, they keep pumping out one must have collection after another.

Few literary figures have endured changing eras and tastes likes Ian Fleming’s spy, [[[James Bond]]]. Fleming created the spy in the 1950s and continued his exploits through the dozen novels and nine short stories before his death in 1964. He got to see his creation catch the attention of a world made uncomfortable by the Cold War, giving them a clear cut hero to root for as he traveled the world and dispatched the Red Menace in all its guises.

Bond has endured despite the constant change in performer, indelibly begun by Sean Connery and carried through by George Lazenby, Roger Moore, Timothy Dalton, Pierce Brosnan and currently Daniel Craig. The world has remained transfixed by the globe-trotter spy, equally adept with women and firearms, always looking best in a black tuxedo. The films, themselves, have gone from depicting the counterintelligence threat from Eastern Europe to megalomaniacs, trying to change and reflect the times. Much like Batman, Bond reflects the tastes of the masses. As a result, we went from the taut thrillers like Goldfinger to the buffoonery that was Moonraker to today’s reboot, a harsher, less disciplined Bond for a darker world.

All of that and more are covered in the 332-page [[[James Bond Encyclopedia]]], lovingly assembled by writers John Cork and Collin Stutz. A visual treat thanks to DK’s art department, the oversized tome introduces to all things Bond. The writers wisely broke things down into categories, updating from the 2007 edition to include [[[Quantum of Solace]]]. We have an introductory piece on Fleming, profiles of the six men to play James Bond, and the sections on The Bond Style, The Role of Bond, Bond Villains, Bond Women, Supporting Cast, Vehicles, Weapons & Equipment, and finally, backgrounds on the making of each movie.  The book concludes with a comprehensive index that’s quite useful.

The Barry Nelson television version, the Casino Royale satire, and Never Say Never Again are omitted – consider this the canonical Bond reference book. Each entry, where appropriate, compares the film version with its prose origins, and differentiates between the differing interpretations such as M, Q, Moneypenny, and Blofeld. If the character appeared on screen and said something, they were included, making this exhaustive and fun to flip through (I had totally forgotten Minnie Driver was in one of the films, for example).

While Cubby Broccoli, Harry Salzman, Barbara Broccoli, and Michael Wilson get their due for guiding the films through the years, I wish a little more attention had been given to the musicians who helped make each film an event. Visually, a section dedicated to Maurice Binder’s stunning opening credits would have been a treat.  Overall, though, this is a book every fan of Bond should have.