Welcome to the inaugural Weekly Haul, a collection of reviews of this week’s comic book issues brought to you by none other than ComicMix. It was a big week for floppies, with four new series worth giving a read and several old standbys seeing new developments. Without further ado, let’s get to the reviews. 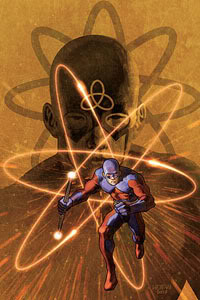 Book of the Week: The All-New Atom #21 — Anyone wondering whether this title would keep being a must-read after Gail Simone stepped aside as writer and Rick Remender took the reins can go ahead and relax. The All-New Atom is better than ever in this issue, which takes the classic archetypal conflict of man vs. himself and gives it one heck of a twist.

While trying to figure out if Ray Palmer’s experiments were responsible for Ivy Town’s craziness, the new Atom, Ryan, shrinks down to explore a sample of his own blood (sounds weird, but it makes sense). Remender makes that effort alone a pulse-pounder, but then Ryan finds some terrible infestation in his blood and all hell breaks loose.

While still a bit text heavy, the series remains just as zany as under Simone’s watch and is a bit more focused. Good stuff all the way around.

— Brian K. Vaughan and Eduardo Risso taking on the most famous mutant is pretty well guaranteed to be a quality read. And while this issue is far from mind-blowing, it’s a far superior story of Wolverine getting his memory back than anything we’ve seen in Wolverine: Origins

. The downside is Marvel once again arbitrarily slapping a $3.99 price tag on a book for no good reason.

Northlanders #4 — This is the classic "from bad to worse" part of the story, but Brian Wood pulls it off well. The best quality of this vikings series is how Wood gives depth to his characters and doesn’t let any of them fall too far into stereotypical roles of heroes and villains. Life is complicated, especially for blood-hungry Scandinavians.

Omega the Unknown #6 — For the most touching tribute yet to the recently deceased Steve Gerber, this issue merits a purchase. It’s also another darn fine bit of comics by Jonathan Lethem and Farel Dalrymple. After all the action of the past few issues, this one serves as a bit of set up to the coming battle with the robots before culminating with a well done metatextual flourish.

— The tie-in to the Darwyn Cooke movie adaptation is more than an afterthought, but it’s not in the same ballpark as the original book. Only the story of Batman vs. Superman is very remarkable or relevant, but it’s just a rehash of every other iteration of that fight. The bonus material on the making of the film is also nothing to write home about.

The End League #2 — Another Remender book. This series has a great premise (the villains won and a small group of heroes fight back), but it’s overly complicated and never manages to have any fun.

— What you need to appreciate about Geoff Johns’ run on this title is how skillfully he restructured the Lanterns’ existence. Continuing the developments of the quite good Sinestro Corps War, Johns further pushes his characters toward extremes and reveals Sinestro to be a better tactician than we thought.

— I really liked the Messiah Complex series up until the befuddling conclusion, and any hope I had of this new series adding a bit of clarity to the situation is long lost. There’s no explanation, just some milling around and then a fight with Bishop. Apparently Bishop having a robotic arm like Cable’s is supposed to be cool. Didn’t do it for me.

— After the great run by Paul Dini ended on such a low note, the series picks up again with Peter Milligan teasing out a strand left behind by the completely underwhelming Ra’s resurrection. It’s a fine story, with Batman doing some actual sleuthing, but it’s a bit hampered by the inexplicable plot device of Batman letting a killer go free. That only runs counter to everything he stands for as a hero.

Dead Space #1 — To this book’s credit, you can’t tell by reading it that it’s based on a videogame. It comes across instead like a new riff on the old "spooky stuff in space" routine. Think Event Horizon

. Ben Templesmith’s art is appropriately ethereal, but the issue is too slow and the big reveal isn’t a good enough hook to keep me reading.

Jonah Hex #29 — I jumped off the bandwagon on this series during that run of issues featuring rapes, but I gave this one a try. Hex falls into the hands of a band of superstitious Native Americans who worship a scorpion. It’s a trippy, affecting issue that benefits from the anarchic art.

Nightwing #142 — Here’s another series that stunk it up for a while but is finally finding its legs. Peter Tomasi doesn’t do anything too fancy, but there’s something to be said for good, solid heroics. There’s also great interaction between Dick and Tim and the laugher of the week when Dick borrows the Bat Jet and leaves a note for Bruce that’s signed "Jimmy Olsen."

— Ugh. You would think this stupid collection of characters (they all have claws!) would make a crappy team, and they do, making stupid decisions right and left. Also, how does a huge explosion that blows up a building not at least seriously injure the people standing right next to the bomb? This series is like a train wreck, except less fun.

— Pretty art, solid writing. You know the drill. My only complaint is that the individual issues are a bit short on story, so the book works a lot better in collected form. By the way, to see the great ComicMix TV team covering this book’s midnight debut, check out the ComicMix TV: ‘Dark Tower’ Midnight Release video posted earlier this week.