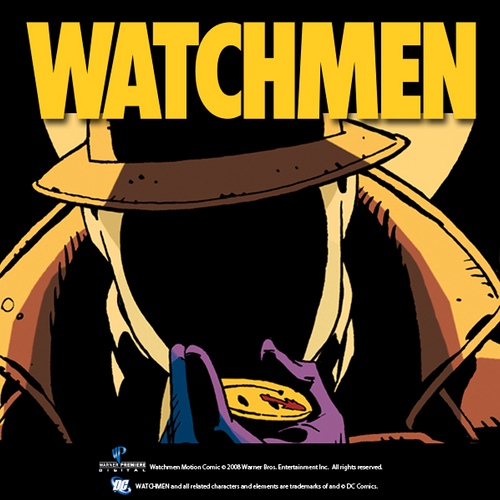 With the release of the first chapter of Watchmen in July, things have quieted down for Warner Premiere and Warner Bros. Digital Distribution. With an initial promise of bi-weekly episodes of Watchmen and Batman: Mad Love back in the summer, that was inevitably altered due to the ongoing legal battle revolving around the film, and the insurmountable success of Dark Knight. Finally, after four months of waiting, a second chapter for Watchmen has been released on such platforms as iTunes, Amazon Video On Demand, Xbox 360, and Playstation 3 for a small price. Warner Premiere also recently announced additions to their Motion Comic projects. Premiere has now stated that Mad Love will be attached as a DVD extra for the Dark Knight DVD later this year and that the Watchmen motion comic will be released every two weeks, continuing with chapter 3 on October 20.

Sadly, the hiatus didn’t effect the production of the comics, and all characters will still be voiced by narrator Tom Stechschulte, and this includes even the female roles. Those who haven’t caught the first chapter, the illustrations are taken directly from the book, with the characters’ joints and movements animated slightly to act as a hybrid of Audio Book and Flash Animation. It’s worth a watch for anybody who was a fan of the book and needs something to hold them over until the film gets released next May (or not).

You can purchase Chapter 2 from the iTunes Store here.