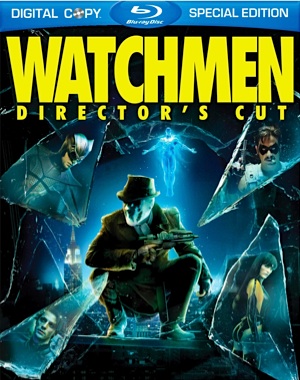 No one can fault Warner Bros. for not giving their best marketing effort to get people to come find out for themselves why the fans and the mass media have been falling over themselves to hail Alan Moore & Dave Gibbons’ Watchmen

as the greatest graphic novel of all time. Last summer they hooked the geekerati at Comic-Con International and spent the fall and winter making certain the rest of the world knew the film adaptation was coming. When the press reviews began hitting, the mixed commentary all talked about the difficulty of translating the dense, layered narrative into a film regardless of length. Some found it faithful and well-done while others couldn’t follow the story and thought it was too somber for its own good.

While the diehards attended more than once to sop up every nuance, the rest of America seemed not to care anywhere near as much. For those of us familiar with the language of comic books and graphic novels, we easily followed the movie while those less versed found it off-putting despite the brilliant 12-minute opening that set the stage. As a result, the film earned just $107,509,799 domestically and with additional $75,225,483 from international screens, it stands as a commercial disappointment.

As I said in my review last March, the film was not at all a creative disappointment. There are sharp performances, especially Jackie Earl Haley and Jeffrey Dean Morgan, and while there are favorite characters missing or diminished, the movie does a solid job condensing the story. Still, it feels constrained and probably would have worked better as either two films or an extended premium cable miniseries (although that would have been prohibitively expensive to mount). Now we have additional footage in [[[The Watchmen Director’s Cut]]] being released tomorrow by Warner Home Video. It’s available in standard and Blu-ray editions, each packed with extras. Here’s a sample:

So, should you get this at all? If you liked the movie at all and want
to luxuriate in being able to study it or see what was trimmed out,
then the answer is yes. Be warned though, this cut still does not
include the [[[Tales of the Black Freighter or Under the Hood]]] material which remains available on a separate 2-disc set. Within the disc is an insert announcing the December release of the [[[Watchmen: Ultimate Collector’s Edition]]], a 5-disc set that will include the director’s cut plus the Black Freighter material, making it closer to a true replication of the graphic novel, additional new commentary, Under the Hood (if you don’t have that disc yet) and the Complete Motion Comic.

The
additional footage, weighing in around 30 minutes, has a lot of
additional or extended scenes that connect the whole better. The women
– Carla Gugino and Malin Akerman – benefit the most from the new
footage, especially as the paranoid government grills the second Silk
Spectre as to the whereabouts of Dr. Manhattan after his withdrawal
from society. Those who missed the death of Hollis Mason also regain
that important story beat.It’s the Blu-ray extras, though, that
show why the DVD market will never go away. There are way too many cool
geegaws you won’t get by just downloading or streaming a movie.
Warner’s Maximum Movie Mode is a souped-up Pop Up track with trivia
tidbits along with Snyder interrupting the movie now and then to show
off really cool bits and pieces. His enthusiasm for the details showed
in the finished product and his narrative shows his continued
fascination with the recreation. Techheads can have fun playing with
the side-by-side commentary or call up “Focus Points” independent of
the MMM option.

The second disc has three additional extras all of which are fun and engaging starting with [[[The Phenomenon: The Comic That Changed Comics]]],
a look at the original 12-issue maxiseries and why it took the comic
world by storm, an important element usually overlooked when heaping
praise on the title. Of course, Alan Moore would have nothing to do
with this so artist Dave Gibbons does the heavy lifting for the two of
them and does so in a relaxed, engaging way. There’s also [[[Real Super Heroes, Real Vigilantes]]]which is a mini-documentary on real world vigilantes such as New York City’s Guardian Angels, who appear on camera. Legal and psychological
folk also chime in about mobs, mob rule, and the need for vigilante
justice.  [[[Mechanics: Technologies of a Fantastic World]]] looks at
the real and projected science that is employed in the film. If you’re
at all interested in science, this is for you, others may tune out. The
disc also contains the 11 video journals that were released online
during production and My Chemical Romance’s music video.

Blu-ray
fans can also use the BD Live function to participate with related
programming at San Diego this week along with future events.

A third disc is a digital copy of the film, useful for traveling.