Review: ‘Tales of the Black Freighter’ 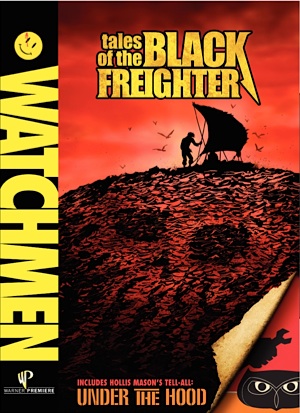 One of the key differences between watching [[[Watchmen]]] and reading the complete book is the rich variety of extras in print.  In addition to the story, there was the secondary story, [[[Tales of the Black Freighter]]], in addition to newspaper clippings and excerpts from Hollis Mason’s [[[Under the Hood]]]. Initially, these extras were never considered but were instead added after DC’s management wisely decided the maxiseries should appear without advertising. Freed, Alan Moore and Dave Gibbons filled the pages with rich context, inviting readers further into their imagined universe and making for a more fulfilling reading experience.

Watching Tales of the Black Freighter

, available to buy or download on Tuesday, you feel like you’re getting supplemental material divorced from the main story as opposed to being fully integrated with the Zack Snyder-directed feature film.  One supposes we must all wait for the director’s cut where at least the Pirate tale will be once more edited in with the main story.

The animated version of the pirate comic book looks nothing like Gibbons’ art (or for that matter, the one page Joe Orlando contributed) but more generic.  Having said that, it uses Gerard Butler’s narration to great effect along with a muted color palette.  The actual animation is fine as is the music but it’s the haunting story of one man’s survival from the wreck of the [[[Black Freighter]]] (a named plucked from Berthold Brecht) and how this experience has changed him. In many ways, it’s Moore’s contribution to an issue of House of Mystery, but it also shows the kind of escapist literature read by the denizens of a world where Dr. Manhattan exists.  The animation runs about 26 minutes and does a nice job overall. You hear Nina Simone’s version of “[[[Pirate Jenny]]]”, also on the soundtrack disc, over the final credits, further tying the pirate to Brecht.

Also on the disc is a mockumentary that delves into how prime time would have featured Under the Hood’s release in 1975 with a retrospective look fro 1985.  Many of the Minutemen appear on camera in one way or another, from faux newsreel footage to on camera interviews, and this fleshes out the Watchmen’s world quite well.  The interviews, the probing questions, and television advertising of the era (along with some for Veidt-produced products) make for a nifty 38 minutes.

Will your appreciation for Snyder’s film change by watching this? Probably not, but it does help immerse you further into this world and you can appreciate the effort, be entertained, and find more context for the world.

“Story within a Story” is a nice look at these supplemental features as former DC president Jenette Kahn, current DC President & Publisher Paul Levitz, Senior VP Richard Bruning, and initial [[[Watchmen]]] editor Len Wein all talk about the evolution of the backup material and how it became integral to the story. Some of the cast and crew also discuss the movie’s fidelity to the source material and how much fun it was to make.

The disc comes with trailers for the Watchmen, its video game, [[[Terminator: Salvation]]], and the [[[Green Lantern]]] featurette also found on the [[[Wonder Woman]]] disc.  You can either get this now or hope it is all included in some mega set down the road.