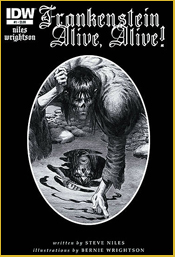 I used to provoke this asinine debate – one of a great many – that if we refer to comics published circa 1943 to 1950 as 52-pagers, we should refer to contemporary comics as 36-pagers. I always got pushback from my fellow fanboys; consistency is in the mind of the beholders, hobgoblins that we may be.

Well, finally, decades after I threw in the towel, this debate has been resolved. And not in my favor.

This physically came to my attention in the form of an advance copy of IDW’s Frankenstein Alive, Alive! It’s by Steve Niles and Bernie Wrightson, which is some amazing pedigree. Of course, Bernie has been known for his efforts with the Frankenstein Monster since well before his first name grew that extra E, and Steve has been l’enfant terrible of horror-themed comics for the past decade. Both earned their high reputations the hard way: they worked for it. Joining the two is sort of like taking bits and pieces of two gifted bodies and stitching them together.

Hence, Frankenstein Alive, Alive! It is at least as brilliant as we have every right to expect. You’ll probably just gawk at the art for a couple hours, but the joy is totally revisited once you realize you’re actually supposed to read the thing. It comes out next week. If you want it early, get yourself your own column.

But that’s not my point… which is why I can get away with such a short review. After reading Frankenstein Alive, Alive!, I had the uncanny feeling something was missing. No, not my brain, Igor. I went back and counted the pages.

32. Not 36 counting the cover. 32 total. The cover was there because you can’t publish a pamphlet starting with page two, but it had what we in the publishing racket call a “self-cover.” That means there’s no four-page addition on higher quality paper surrounding the interior. It’s all of the same stock, all printed at once without the additional collating and binding step and it saves a bit on shipping costs, saving the publisher money. The story page count is 19 pages, a tad short but there’s plenty of groovy supplemental material.

So I checked another IDW book set for the same week’s release: John Byrne’s Trio #1. I haven’t read it yet, so you won’t have to suffer from another half-assed semi-review. But it, too, is 32 pages total.  We get 20 pages of story here, but there’s advertising material in the back.

The thing is, self-cover comics have been quietly creeping up on the racks for a while now. I prefer to read comics on my iPad, so it took the power of a Niles/Wrightson collaboration to make be return to the traditional stapled way of life. I can hardly fault publishers for this effort, given the higher quality of paper stock generally used these days.

But it is a bit of a sea change, one of the last before the 36… sorry, 32 page comics pamphlet disappears into the digital ozone. And that saddens me, ever so slightly.

Whoops. I got over it.