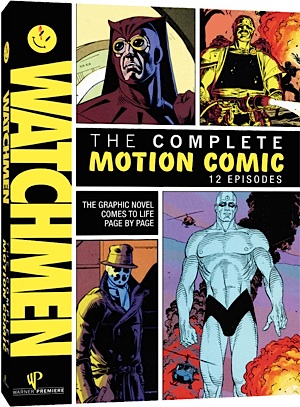 How do you exploit a finite series and wring every last licensing dollar out of it? DC Comics has come up with a plethora of nifty brand extensions from the long awaited action figures to the nice art book from Titan Books.  But, the most interesting and innovative has to be the Watchmen Complete Motion Comic

which has effectively animated the dozen issues, added narration and music, and turned it into something new.  This has been available for purchase on line, chiefly through iTunes, but today the complete series is being released in a two-disc DVD set.

Those of us with long enough memories have equated it with the cheaply animated [[[Marvel Super Heroes]]], from Grantray-Lawrence Animation in 1966. Unlike that hodge podge, all the art you see is from Dave Gibbons’ illustrations. He was actively involved with the production and his attention to detail comes through.

One of the biggest advantages to this method is that each panel can now be studied on the big screen.  You can check out all the background details, all the little things that Alan Moore had Dave add to scenes to get the message subtly across.  This, in some ways, surpasses the Absolute Watchmen

Characters walk, wave their arms, move their eyes, and so on.  The motion is more fluid than one would expect and the background characters and objects move nicely.  The captions and word balloons are retained to give it that “comic book comes to life” feel but director Jake S. Hughes also employs film techniques to change scenes and tosses in some CGI animation for special effects but is judicious with their use.

What you lose, though, is the tightly constructed format which was also done intentionally.  The 9-panel grid that Dave employed was as much an element in the maxiseries as was the story. In fact, the [[[Watchmen]]] may well have been one of the first comic books to have been designed from the ground up prior to work beginning on the scripts.

It’s all a tradeoff.  Much as I miss the grid, I miss more the excised dialogue which was trimmed, we’re told, in the in interest of time. As a result, this is an adaptation and not a complete retelling of the comic in animated form.  Similarly, all the backup material which rounded out each issue is gone. You’ll have to a buy Tales of the Black Freighter

on DVD later this month for that pirate tale along with Under the Hood. Of course, you could wait for the mega-version when director Zack Snyder integrates everything into one master story but I digress.

One of the additions, which I found myself enjoying, was the music, scored in a James Horner style. It was moody, low key and totally appropriate to the subject matter. And in a goofy way, I loved that the word balloon tails followed the characters as they moved, always how I imagined things working after reading Who Censored Roger Rabbit?

The vocal work is entirely handled by one voice actor, rather than a complete cast. Tom Stechschulte, a television actor, does a superior job giving life to each character.  His female voices were off-putting but he nailed all of the male parts which was quite a challenge.

The extras here are trailers for related product and an extended look at the just-released Wonder Woman animated feature.  There are other, cooler, extras on the Blu-ray disc which was not reviewed.  Now, is this affordable and worth having?  Overall, this was a satisfying experience and helped me refresh myself on the story in time for the movie. You could download each chapter for $1.99 ($24 total) or buy the DVD which retails for $29.98 but obviously will be discounted just about everywhere you look. The kicker, though, is that it comes with a $7.50 coupon to use with purchasing your movie ticket so there is a cost savings to be had.