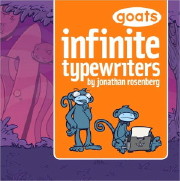 It’s not true that every webcomic will eventually have a
book, even if it seems that way. There are some projects that even [[[Lulu]]] will
choke on; some things that are too short and obscure and just plain pointless
to be immortalized in cold print. But, with magazines and newspapers running
around like the proverbial head-chopped chickens – all the while conveniently
neglecting to mention the fact that newspapers had the most profitable two
decades of their existence right up to a handful of years ago, and collectively
blew those profits on buying each other out and paying off the families who
were smart enough to take huge wads of cash and toddle off to do something less
glamorous, like badger sexing – webcomics are beginning to look like the only
good game in town, so even staid book publishers – like Del Rey, the science
fiction imprint of Ballantine, which, despite being part of the massive,
serious, Bertelsmann/Random House empire, has made buckets and bushels of money
over the past thirty years from [[[Garfield]]] books and even less likely drawn items – are surfing heavily from work, calling
it research, and drafting up big-boy contracts for cartoonists whose work has
only previously appeared in shining phosphor dots.

(And, now that that
sentence has cleared the riffraff out, let me get down to specifics.)

The house most active in snapping up webcomickers is the
comics publisher Dark Horse; I don’t believe they intended it that way, but
they’ve taken a strong line in signing up nearly all of the webcomic creators
that I read and appreciate on a regular basis. What does that leave for other
publishers? Well, it’s a big web, and God knows – despite my occasional
pretense otherwise – I’m not the Czar of Online Comics (though that would be a great job to have – mental note: give BHO a
call later to see if it’s possible), so there are almost certainly dozens of
damn good comics online that I don’t already read.

Which is a really roundabout way of saying
that I wasn’t familiar with [[[Goats]]] – even though Rosenberg has been doing it since the end of April 1997,
and the entire archives (including the strips reprinted in this book) are all
available online, costing no more than a few cents for electricity and an
attention span unusual in any web-surfer. If you don’t believe me, have a link – that goes back to the very first
strip, which, in usual daily-comics fashion, bears very little resemblance to
the strips reprinted here.

[[[Infinite Typewriters]]]
begins with a twenty-six page section that is completely new and unavailable
online, forcing all of Goats’ cyber-fans
to buy the book (or lurk around dark, extra-legal corners of the Net for their
“torrents”). This functions partially as a half-assed attempt to introduce the
main characters – who turn out, for most of the strips in this book, to not be
the two youngish men chatting in a bar, or even the talking goat (which, even
is he is entirely singular, would at least have something to do with the strip
title, which otherwise seems as detached from the strip itself as Peanuts was), but rather a talking rooster and fish. Before
long, that rooster has spawned a child – a cute little chick, who, as required
by all mass media, is Machiavellian and megalomaniacal in a direct relationship
with how widdle and cute he is. There are also two aliens, in the standard Gray
configuration, who are about as important as the two young men. (And then the
reprints kick in, starting with December 1st, 2003
and running through January 12th, 2006.)

These characters – men, aliens, goat, fish, poultry, and
others, including, very late in the book, the monkeys on the cover – bounce off
of each other in various, very odd adventures, which Rosenberg moves forward
through lots and lots of very wordy, generally humorous dialogue. (Any
insinuation that Your Humble Reviewer has drunken of the Rosenberg Kool-Aid and
that said beverage has influenced the writing of this very review will be met
with scorn and derision. Come to think of it, nearly any statement that YHR
even mildly disagrees with will be met by scorn and derision. Scorn and
derision are quite useful rhetorical devices, you know.)

It’s difficult to describe or summarize the plots of Goats stories – suffice it to say that Jon and Philip, who
I believe are the cartoonist and his best friend/roommate/imaginary friend,
steal the aliens’ spaceship, fly to the center of the universe, meet God, who
is living in a condo, trick him to shape-shift into a pork chop, and then eat
him…all to settle a bar-bet, and all as part of that new introductory story,
which is basically just Rosenberg cracking his knuckles and clearing his
throat. Things get generally more demented from there, though they always seem to make sense within any one strip.

All right, let me break out a quote. Scott McCloud, who has
forgotten more about comics than the entire art staff of Image Comics ever
learned, said thus: “Jonathan Rosenberg has perfected a concoction of bizarre
plot developments and quietly absurd dialogue.” See? What he said.

[[[Infinite Typewriter]]]
is the first of three volumes that Del Rey will publish – the upcoming books
are named, as of course they would be, [[The Corndog Imperative]]] and [[[Showcase Showdown]]]. Given that Infinite Typewriters collected approximately two years and six weeks of
strips, I’m going to estimate that Corndog will bring Goats up to
mid-March of 2008 and Showcase
into the far-flung future of the early summer of 2010. But if simple linear
extrapolations ever worked, we would be up to our ears in Beanie Babies right
now, so I very much doubt that is actually true. In any case: there will be two
more books. Those books will be at least as demented as this one. This will be
a good thing.

I might have missed Goats before without knowing it, but, if I miss Goats from now on, it will be on purpose!

No, wait: that didn’t come out right. [[[Goats]]] makes very little sense, and takes place in a world ruled by whimsy and farce as much as by villainy and evil – but it’s funny in its dementia, and it’s more like Goats than any other strip ever could be. And you can’t ask for more than that.