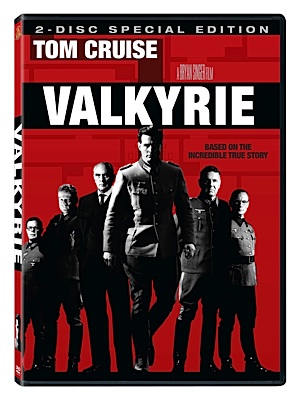 World War II seems to have generated countless stories about heroism and bravery, stories told for the point of view of the allies and the axis, stories told about life on the homefront and life in the foxhole. As a result, it remains an enduring source of fodder for filmmakers as more and more details come to the surface. Through the 1950s and 1960s, most of the WW II movies were highly fictionalized accounts and by the 1970s war stories were played out, fewer and further between. In the last decade, we’ve had history to sift through and we now know of [[[Schindler’s List]]]. Valkyrie

, Bryan Singer’s entry into the pantheon, intended to tell us of the closest a plot to assassinate Hitler came to working.  Presuming you were taught anything about the war in school, you might not even know there were over a dozen attempts to kill the Chancellor of the German Republic.

It’s a story worth telling but it should have been better told. The film was well structured by writers Christopher McQuarrie and Nathan Alexander and Singer is to be commended for shooting on location, which gave the film a great look. The cast, led by Tom Cruise, Kenneth Branagh, Tom Wilkinson, Terence Stamp, Bill Nighy and Eddie Izzard, is to-notch with many performers closely resembling their real world counterparts.

All that was missing was giving a damn about any of these players. The script drained each and every character of personality, sapping the energy out of a story that should have been as compelling as the facts. Colonel Claus von Stauffenberg, credited as the mastermind behind using Hitler’s own Project Valkyrie against him, was actually an outspoken critic of Nazi Germany. He was a brilliant, well-educated man who spoke multiple languages, loved literature and was partial to horses as well as being a family man, raising four children and embarking on his mission while his wife carried their fifth child.

Wish some of that came through beyond perfunctory scenes of him leaving the family to go kill the Führer.  Cruise is restrained but also bland. The others allying himself were also drained of personality so we never understand why everyone revered Ludwig Beck (Stamp), who was actually quite the legendary figure and a reason so many signed up for the July 20 Plot. Instead, Stamp sits around and makes phone calls.

The actual plot is like a [[[Mission: Impossible]]] story with the usual complications but add to this a lack of conviction on the parts of various players, which at first slows and later tips the balance of action on that fateful day in 1944.  It’s fascinating to see the way communications worked back then, and how people had to sit around and wait for the news over the teletype or radio.

In the end, though, we see how the plot failed and what became of the conspirators but by then, their fates leave you unmoved because after nearly two hours you don’t care about any of them.

Instead, you can skip the movie and go the special features on the DVD, now available. There’s the usual Making Of which shows the detail that went into securing the locations and what some of the locale people thought of the production, especially those still alive who recalled that day. But, best of all, is the 42-minute documentary from Kevin Burns that tells a far more compelling story as the children of von Stauffenberg and other conspirators discussed what they remember plus what their lives were like in the years that followed. This made us care and showed an aftermath the film barely acknowledged. The documentary also tells us some 700 people associated with the plot were tried – that’s a much larger scope than implied in the film which would have given the story more impact.

If I were you, I’d rent the disc, skip the film and watch the documentary.