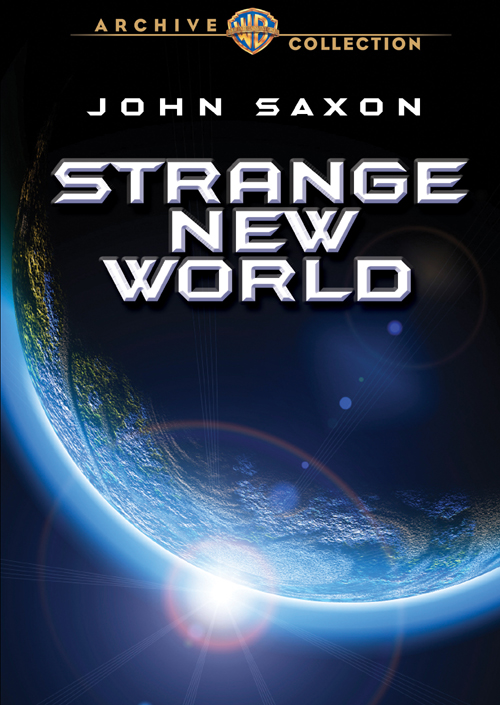 Gene Roddenberry spent the 1970s attempting to create new series and while many got as far the pilot film, none ever went to series. By the end of the decade he was frustrated and gave up, tying himself to [[[Star Trek]]], riding that cash cow to the end of his life.

His first attempt was 1973’s [[[Genesis II]]], a take on post-apocalyptic life on Earth, starring Alex Cord as Dylan Hunt (a name that got recycled). The CBS movie of the week looked good and almost made the schedule when the network opted instead for [[[Planet of the Apes]]]. Roddenberry continued to rework the notion, revising it into[[[Planet Earth]]], and switching from CBS and Cord to ABC and then rising action star John Saxon.  After that aired and failed, Roddenberry wisely walked away from the idea in favor of [[[Questor]]] and [[[Spectre]]].

Others, though, didn’t give up and tried with Saxon one final time in [[[Strange New World]]]. While the earlier attempts were released as a part of the Warner Brothers Archive program in October, only this week did this final act become available.

The common denominators are that the PAX organization sent astronauts into space in a state of suspended animation. Meantime, Earth was devastated and when the explorers awoke, they had to survive in a world they no longer recognized.

Airing March 23, 1975, we get an info dump narration to open the story of Strange New World, clearly lifted from the opening lines of Star Trek. Similarly, the [[[Enterprise]]] Bridge sound effects that open the telefilm make you think there’s still a Roddenberry connection which there most certainly is not.

Say what you will about him, but when he envisioned the future, he did his homework and researched where we were and where the experts thought we were headed. You see a lot of that especially in Genesis II. Writers Ranald Graham, Walon Green, and Al Ramrus did none of that and as a result the state of the Earth makes little sense after a series of meteors destroyed civilization as the astronauts knew it 180 years earlier.

Saxon, this time, is called Captain Anthony Vico and is accompanied by Dr. Allison Crowley (Kathleen Miller) and Dr. William Scott (Keene Curtis). The movie is actually two stories, neither of which is very good. In the first half, they encounter a utopia only to discover that there comes a price – with the ability to reproduce eradicated, the eternally youthful-looking people have resorted to cloning themselves for an endless supply of body parts. Of course, for some bizarre reason, each swab for more genetic material weakens the donor and eventually, the problems of aging become apparent. The hope is to refresh the supply by capturing our intrepid heroes.

Vico has other ideas and winds up destroying the cloning facility,
condemning this closed off society to inevitable death. The trio flees
in search of food, water, and a place to call home. While getting a
sense of how much the meteor strikes has altered the ecology, they
encounter bands of survivors who have maintained vestiges of American
culture and morality. The arrival of the astronauts brings the two clans
into conflict as both want the gun Vico foolishly waves around without
first figuring out how much ammunition he has left. It falls to Dr.
Crowley to bring about a more peaceful solution.

The writing and world-building is a mess while clearly this was shot on a
shoestring budget without much thought into sets or costumes. Robert
Butler, who directed the first Trek pilot, “The Cage” and who
went on to a distinguished career specializing in pilots, has a rare
misfire with this, getting flat performances from one and all.

The movie is a time capsule as we see many familiar faces at different
moments of their career such as the great Richard Farnsworth in the
middle of a fabulous career; Gerrit Graham before he became a cult
figure, Catherine Bach before she donned her short shorts, 1974 Playmate
of the Year Cynthia Wood who was switching from modeling to acting and
Martine Beswick long after her Bond girl days.

The Archive program allows us to see often neglected works or cult
favorites that could not work in standard commercial channels. A minimal
effort goes into producing these so in this case the transfer is a
little too dark and scratchy. This is most certainly only for those who
must own anything remotely related to Roddenberry.