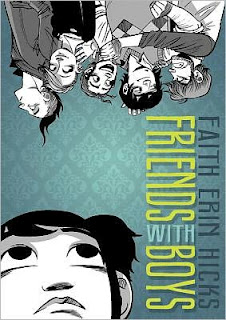 , the new graphic novel by Faith Erin Hicks (whose The War at Ellsmere

I reviewed in a huge round-up month), has an oddly ill-fitting title; it’s the story of a teenager, Maggie, who is starting in a public highschool after her mother (who home-schooled her and her three older brothers — all of whom oddly seem to still be in the same school though there seems to be a few years in between her and her twin brothers and then the oldest one) ran away mysteriously. Maggie has trouble making friends with anyone, since she’s been so wrapped up in her family, but she’s a tomboy, and has been closer to boys (her brothers) her entire life. So being “Friends With Boys” isn’t really the big thing here — it’s that she’s in the company of people who aren’t family, or without her mother, or something along those lines. The title also makes her homeschooling sound more controlling or sinister, as if it were based on some controlling-young-women religion, and it isn’t like that at all.

But there’s nothing to stop Maggie from becoming friends with boys, or more than that — her brothers are friendly and supportive (if awfully rough-and-tumble) rather than over-protective, and even her father (the chief of police of their small town) is a support rather than an authority figure. Friends With Boys is somewhat the story of potential friendships for Maggie, but those friendships are with a brother and sister (Lucy and Alistair) that she meets at school, her brothers (as they work out their own conflicts), and a ghost that she’s been seeing in the local graveyard for the past seven years.

The ghost and the Alistair/Lucy friendship together drive much of the plot — Alistair, a mohawked punk, has a feud with the blond captain of the volleyball team (though, luckily, it’s not otherwise as cliched as that may sound), and Maggie is sure she knows what she has to do to put that ghost at rest. But, if Hicks has a message in Friends With Boys, it’s that things are more complicated than they look. There are several plot or thematic strands that are raised but never resolved — primarily among them the disappearance of Maggie’s mother just before the book starts — and the answers we do learn aren’t the ones we expected.

All of that makes Friends With Boys an excellent graphic novel for teens, its expected audience — it’s a story about walking out into a wider world, not entirely understanding it, making plans based on what you see — and then still not entirely understanding that world. So much fiction for teens tries to wrap everything up in one ball or another — that everything is horrible because adults, or that they can be perfect special snowflakes if they want, or some other pat explanation — that Hicks’ messy complications (and that’s without any kind of love-plot, too; how complicated will Maggie’s life get what that gets into the mix?) are a breath of cool air, like the dizzying view from a mountaintop. As this book ends, Maggie still hasn’t learned how to be friends with boys, but maybe she has learned how to be friends with her brothers, which is one step forward.