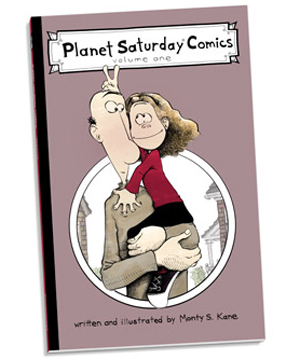 [[[Planet Saturday Comics: Volume One]]] collects short vignettes previously published on the Planet Saturday Web site. The stories, apparently based on the writer/illustrator’s own life, all concern either the child Emory (aka M, as in Monty), and his attempts at [[[Calvin and Hobbes]]]-like flights of fancy, or the 40-year-old Emory and his travails parenting his daughter Dorothy. (I’m not sure where the mother is in this picture. In real life, Kane’s wife helps him run the site.) Each vignette is accompanied by an entirely unnecessary text explanation that seems to be there solely to pad out the book.

Critiquing Planet Saturday feels a bit like kicking a puppy. The characters are just so darn sweet, and if you buy the book directly from the site, they’re donating $1 to health care for uninsured kids. Nevertheless, if I don’t kick the puppy, I must at least nudge it gently back into its owners’ yard; it’s not getting a particularly warm reception over here, despite its almost desperate eagerness to please.

It’s unfair, considering that so many of the mainstream newspaper features have moved online, but I still expect Web-only comics to be a bit more edgy or niche-oriented than the stuff I read in the local daily. I really can’t see what this strip provides that I couldn’t find in [[[Stone Soup]]], [[[FoxTrot]]] or (shudder) the [[[For Better or for Worse]]] retread. Emory’s kid imagination is pretty garden variety (I wish I could fly so I could escape the local bully; I ruined my shirt pretending to be a caveman), and his parent’s-eye view offers no insights we haven’t seen before (my daughter plays her music too loud and she’s growing up too fast). The strip’s just not funny, or quirky, enough to really grab your attention. The art is nice (appealingly rounded, slightly exaggerated figures against a softly detailed background), but that’s about all this book’s got going for it.

If you simply must see the strip for yourself, I’d advise sampling the free milk online, rather than paying for the print version of the cow. (You can still donate that dollar to children’s health, though, if it’ll make you feel better.)