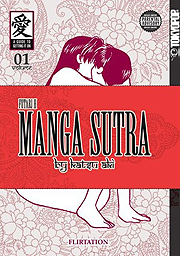 It used to be, if you wanted to reach for the comic art form for your sex education you had to send a couple bucks to those want ads in the back of the cheesy magazines for “Comics – the Kind Men Like!” That stuff was a bit distorted; well, in the case of the ones that featured [[[Popeye]]], I’d have to say they were quite a bit distorted.
Trust the Japanese to get real. After all, they’ve been using the comic art form to foster all kinds of truly educational venues: business, economics, history, language, and so on. You’d figure sex ed would be a no-brainer.
Be that as it may, doing sex ed comics in the form of a genuine story with a plot and character development is uniquely Manga. And TokyoPop brought the first volume of this series, Katsu Aki’s (Futari H) [[[Manga Sutra]]], to American shores.
Manga Sutra

is a sweet and sensitive series that focuses on the psychological aspects of sex as much as – actually, more than – the mechanics. The story is about a young couple, Makoto and Yura, who met through an arranged “marriage meeting.” This is sort of a counseled dating service, but one where the ultimate intent of marriage is upfront. The two 25 year olds dated, liked each other, got married, and only then discovered they were both virgins with a lot of understandable insecurities and a lack of any clue.
Their friends and even relatives aren’t much help, each putting pressure on the couple (individually and collectively) to get it on and to make sex the wonderful, magical, astonishing and spiritually fulfilling event we all know it’s supposed to be all the time.
Katsu Aki makes it easy to understand Makoto and Yura’s feelings and identify with their insecurities. I really developed a relationship with the characters in the story; that seems implausible for the sex manual medium which is usually either too clinical or too exploitative. There’s a lot of information in Manga Sutra, but it’s usually presented in a clever and entertaining manner that does not get in the way of the story. The author is a master storyteller.
If you’re looking for a stroke book, I’d have to recommend, oh, Bill Willingham’s offerings from Eros Comics. But if you’re looking for a real story with real characters, Manga Sutra is wonderfully fulfilling.
Manga Sutra Futari H: Vol. One, Flirtation
By Katsu Aki
TokyoPop, $19.99, 347 pages (6” x 9”)
Labeled Mature
Share