REVIEW: Captain Caveman and the Teen Angels – The Complete Series 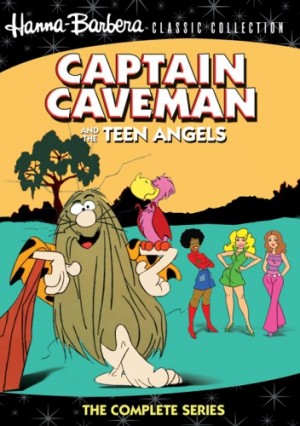 In the 1960s, super-heroics were such the rage that ever era seemed to inspire a masked champion for Saturday morning fare. We had the Mighty Mightor who could been seen as an ancestor to his comedic counterpart, Captain Caveman, which also reflects the shift from dramatic fun to slapstick comedy (also showing how parents boxed in the animators).

Captain Caveman and the Teen Angels was created for Hanna-Barbera, shortly before they split to form their own outfit. It ran from 1977 through 1980 in ABC and the complete 40 episode series is now available on a three-disc set from Warner Archive. The series started off sandwiched as a part of Scooby’s All-Star Laff-A-Lympics and Scooby’s All-Stars before gaining their own thirty minute slot. Brenda, Dee Dee and Taffy, the erstwhile angels, found a caveman frozen in a block of ice and thawed him back to life. Now, Cavey and the girls went around solving mysteries and getting in and out of trouble. Nothing new here except you’re mixing in the detectives from Scooby-Doo with super-heroics, all played for comedy. While a trinity is a common element in such shows, the girls and name in particular owe a lot to Charlie’s Angels, which had taken the nation by storm not long before.

Much as Mightor shouted his name to invoke his powers, so too does the Neanderthal crimefighter. In addition to the standard-issue powers, his ancient fur clothing contains an unending amount of gadgets for convenient use. Not only does the show feel familiar it sounds familiar with the hero voiced by the legendary Mel Blanc and narration from Gary Owens. The girls were voiced by the lesser known Marilyn Scheffler, Laura Page and Vernee Watson.

As was far too common at the time, the mysteries were never terribly challenging and the characters were allowed one personality trait each as if they were being rationed because of a budget shortfall. The antics are not terribly inspiring such as Cavey’s flying powers proving erratic only when he truly needed them. And while he eventually revealed to the audience his crush on Taffy, not that she ever knew it. He’s also saddled with stereotypical caveman speak which can prove grating after a few minutes.