ComicMix Six: What you need to know about ‘Lone Justice: Crash!’ 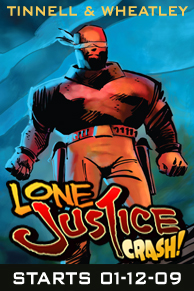 LONE JUSTICE: CRASH! is the new graphic novel from the Harvey Award nominated team of Robert Tinnell and Mark Wheatley.  It will begin right here on ComicMix on Monday, January 12th.  And in the interest of making all things EZ, we present the top 6 essential things you should know before you start reading:

1) LONE JUSTICE: CRASH! is a two-fisted, pulp adventure set in the year 1930, just after the big Wall Street crash in 1929.  It is a time when there is great uncertainty in life, work and politics.  But it was also a time when pulp magazines were introducing vital new characters to the public that we would eventually come to call Super Heroes.  So, step aside, Doc Savage, the Shadow, and the Spider – and make way for Lone Justice!

3) Yes, that means Tinnell and Wheatley are taking credit for the work of two fictional characters.  They have no shame.

4) Maybe you don’t need to know that the core ideas behind Lone Justice’s tribulations in CRASH! can be found in the pages of EZ STREET – particularly in the character of the homeless man young Scott and Danny befriended.  But if you are aware it just might make the reading experience a little richer.  No, really – there are parallels to life events in EZ STREET all through LONE JUSTICE: CRASH!

5) You should probably be aware of just how devastating the Depression was on the United States and its residents.  It was much worse than what is going on today, so far.  Tent cities – known as Hoovervilles (after President Herbert Hoover) really existed.  Hopefully, there will not be any Bushvilles before LONE JUSTICE: CRASH! finishes running on ComicMix.

6) There were often official efforts to keep transient homeless folks out of cities and towns and even entire states.  These were people who were just trying to survive.  But California, for example, would try to keep people from pouring into the state – and they were prone to use force.