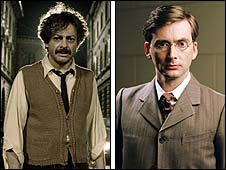 [[[Einstein and Eddington]]] is a story about the pursuit of truth against a background of war, violence, nationalism, subterfuge, and prejudice during World War I.

David Tennant, widely known as the latest incarnation of [[[Doctor Who]]], admirably plays Arthur Eddington, hailed as the “best measuring man in England.”  Appointed as the Director of the Cambridge Observatory, the ninth since Sir Isaac Newton held the position, he is charge with maintaining the truth of Newtonian physics against all comers.  Sir Oliver Lodge, another keeper of the Newtonian faith, is portrayed by the wonderful Jim Broadbent and assigns Eddington to investigate an up and coming German scientist, Albert Einstein whose work appears to question certain aspects of currently accepted physics.  Lodge wants Eddington to prove Einstein wrong, demonstrating the superiority of “British science” over “German science.”

Andy Serkis’s portrayal of Albert Einstein is heartwarming, funny, and frustrating, all at the same time.  Serkis is best known to audiences for his work as Gollum in [[[The Lord of the Rings]]] trilogy , but here we can see him as a flesh and blood actor. The character appears to be incapable of relating to most people, much to his estranged family’s dismay.  He is offered a much needed job at the University of Berlin, the heart of the think-tank for developing better ways of making war.  He cannot understand why they want to use science to build things and kill people, rather than simply love science for the sheer joy of figuring out how thing work, not bend it to their destructive will, and he is quite vocal about his position.

This is the situation when, much to Eddington’s dismay, he discovers that Einstein may indeed be right about flaws in Newton’s laws.  Having never met the man, he writes Einstein a letter which is simply a page of equations.  Einstein responds in kind.  Eddington, a Quaker and pacifist, had found a balance in his life between science and faith, finding room for both Newton and God.  Until he receives Einstein reply.

Between the lines of equations the two men share, they continue to pursue the truth behind the physics and develop an unusual friendship.  Their work continues through a series of personal trials: Einstein ’s affair which leads to a divorce, Eddington’s loss of a dear friend at the Battle of Ypres where he is killed by mustard gas, developed by the same institution employing Einstein, and both of them coming into conflict with the demands of their respective employers.

Something of a recluse, Eddington was never comfortable with being the focus of public attention so it was fortunate that his work brought more attention to the work of Albert Einstein and his Theory of General Relativity.

Einstein and Eddington is a fine introduction to these two geniuses and the science they both loved so dearly.

This period piece was filmed on location at Cambridge University, with Croatia and Hungary standing in for Germany and West Africa. It was written by Peter Moffat and directed by Philip Martin, the team behind the acclaimed [[[Hawking]]]. The BBC production was filmed in association with HBO and debuted on November 22 in the United Kingdom.  An American airdate on the premium channel has not been announced.