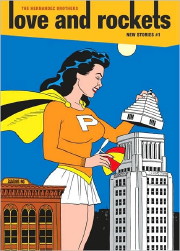 It’s hard to believe [[[Love & Rockets]]] has been around for twenty-seven years now – longer than any of its peers in the “indy” comics world, and longer than a lot of “mainstream” comics characters as well – but dates don’t lie. This trade paperback marks the beginning of a third series of things called “Love & Rockets” – the first was magazine-sized, and started in 1981 (though it shrunk to the size of a regular comic eventually), and then the second was the re-launch of the comic in 2001 for the twentieth anniversary.

This time around, Fantagraphics and the Hernandezes have bowed to the winds of the comics world – the new Love & Rockets will be an annual hundred-page book, rather than a more frequent and smaller pamphlet. And so this book contains exactly fifty pages of comics each from Jamie and Gilbert Hernandez – with prodigal brother Mario turning up to script a six-page story for Gilbert’s art.

Love & Rockets has always swung between the dramatic and the silly – sometimes story-by-story, and sometimes in the space of a single panel. This volume isn’t entirely on the silly side, but it definitely tilts that way, with the first two parts of a long oddball superhero story from Jaime and some shorter, mostly minor pieces from Gilbert, probably unrelated to his major ongoing plots and characters.

Jaime’s story – “Ti-Girls Adventures Number 34” – comes in two parts, which begin and end the book, bookending Gilbert’s shorter pieces. It starts off with his main heroine Maggie, now the caretaker of a small, run-down apartment complex somewhere deep in the wilds of Southern California. Her teenage friend (and object on unrequited lust, if I remember rightly) Angel wants to know the secrets of another resident, Alarma, whom Angel is sure is secretly a superheroine of the same name. Angel of course is right, and Jaime dives into a superhero story, with the requisite complicated backstory and overheated dialogue. It’s clear that he knows that he’s slumming – and that he’s quite enjoying it – but it’s not quite enjoyable on the level of a dumb superhero story (since he does want it to have deeper resonance than that) and it’s mostly about new characters that we don’t expect will have much effect on the wider world of Maggie, Hopey, Ray, etc.

There are fifty pages of that story in this book, and it’s not done yet. So “[[[Ti-Girls]]]” ends up a slight disappointment; it’s a minor piece, and we’ll have to wait a year (at least) to find out how it ends, and probably longer to move back to the real lives of the characters we care about. Jaime draws great women in long underwear – and they’re all individual, with very different body types, so I don’t mean “great women” in the way some [[[Wizard]]] columnist would – and his fight scenes are as much fun as anyone’s. But he’s deliberately turning his dialogue over-dramatic here, and the kind of story this is diminishes his other strengths.

Gilbert’s section is more varied, and sees him in his intermittent experimental mode – he seems to do that, sometimes, in between more traditional stories, as if to cleanse his own palate and ours. The longest piece, “[[[The New Adventures of Duke and Sammy]]],” is a ‘50s Martin-and-Lewis comic, with names changed to protect the guilty, in Gilbert’s style. It’s a bloody alien epic filled with superpowers and singing, and the Duke-Sammy relationship is not quite as homorerotic as one might have expected.

The other stories are shorter and even less obvious, from a single page of not-really-gag cartoons to the surreal and unsettling “?” Two of the stories – “Papa” and “Victory Dance” – are loosely related, though separated in time. And the others are the usual slippery Gilbert short pieces, designed to lead to a moral and simultaneously undercut it. It’s all interesting stuff, but it’s cold and intellectual rather than warm and emotional.

Love & Rockets has its own rhythm, and the Hernandez brothers certainly know what they’re doing by now. This probably wasn’t the very best material for them to launch the series in this new format – assuming there was any hope to get in new reader, and assuming those new readers won’t just be happy to see women in skimpy costumes punching each other – but it’s still solid B/B+ work from the Hernandezes, which is better than the best of a lot of others out there.