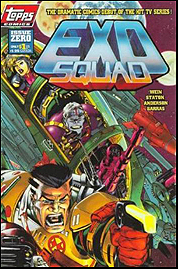 As a rule of thumb (the very same thumb I referenced not seven days ago), I stay away from licensed books. How did I come to that rule? It’s one engrained in my loathing of fan-fiction. Gasp! I’ve never, ever, (ever-ever) appreciated the world of fan-fiction. The whole notion that one’s love of a property goes so far they must appropriate the universe another writer created for their own nefarious purposes seems weak to me. Why limit oneself to the rules of another’s whims when the post-modern world allows for infinite homage, pastiche, and appropriation? Given the pre-sales of My Little Pony: Friendship is Magic (go Katie Cook!), I’m obviously in the wrong.

But Marc, you fickle bastard, you’ve just argued yourself into a corner! You, who have lamented on countless occasions how you’d love to write for Marvel and DC… don’t you realize if you were given a run on Green Lantern, Batman, or the Slingers, you would in essence be “limiting oneself to the rules of someone else’s whims?” Too true.

And when DC and Marvel hire me, you’re welcome to call me a hypocrite.

There’s nuance to this argument, and my greater point stands true. Writing for mainstream comics is its own beast, one I’m sure to tackle soon. For the time being, stay with me.

The fact is that amongst the small presses (still large enough to get rack space) are almost entirely engrained with this unyielding genre, save perhaps for Image or Valiant. Certainly we know why: licensed properties bring with them a given fan-base. For much of Dark Horse, IDW, Boom, and Dynamite’s catalogs are siphoning life-force from the lost and misspent youth of their target demographic. And since I’m no Bob Wayne, I simply don’t know how well it’s boding for any of them. The ideology that the comic buying audience at large is desperate to read more tales set inside the Hellraiser, Battlestar: Galatica, and the Ghostbusters seems legitimate, if only on paper (heh). But when I see the book on the shelf, it is truly taxing to find reason to open the gates again on properties built elsewhere.

Perhaps it’s my fear that licensed comics seem far from canon (that is to say that their contributions will hold true forever). Perhaps it’s my fear that adding to existing canon makes it harder to enjoy. I can’t tell you how many times my unshaven cohort Matt has given me the verbal Wikipedia entry on all that has gone down in Transformers extended properties (novels, comics, soft-core porn). And every time? My eyes glaze over, and I’m immediately reminded that I’m happy to have the G1 box set and Beast Wars and call it a day. It’s this fear of the overwrought rules and backstory one needs to know that stifles any anticipated joy in reading a licensed book.

But what if the teams involved are at the top of their game? Creative teams be damned. Truly, if you told me Alex Ross would paint over a Mark Waid script of G.I. Joe… and that it was the best work ever put out by either one of them… I’d still sooner spend my paycheck on a Grant Morrison Doom Patrol graphic novel or maybe some new socks.

Lest you think I’ve never even given a book like this a chance, allow me a simple anecdote. An amazing columnist for the Chicago Daily Red Eye (think hipster news for the daily commuter) Elliot Serrano had been given the opportunity to write a new Army of Darkness comic. Given that it was a slow week, I decided I should support my fellow indie creator (and he was nice enough to interview me for his blog twice) and give it a chance. I’d never purchased an Army of Darkness comic in the past. My knowledge of the source material was limited to the handful of viewings I’d had of Raimi’s film. And to his credit, Serrano’s pen wasn’t weighed down too heavily by the yoke of backstory that came with the property.

That being said, the book suffered terribly from Serrano having to forcefully hit the beats the license (and, no doubt, the legion of deadite fans) demanded. What we were left with? I quote myself from my MichaelDavisWorld review:

“The book has moments of clarity, but they are dragged down by the wishy-washy plot and cardboard cutout of a protagonist. I think I’ll go put on my copy of the movie, and bury this necronomicon deep in a long box… in hopes that the evil spirits lurking within don’t wreck havoc on my soul.”

Given that I thought Elliot’s writing was better than what he’d showed on page only proved to me that the book was not intended for me. While fans of the AoD universe were heralding it as a success, I was left back in the starting blocks wondering why the book shifted tone more than Mitt Romney (ooooh, semi-late reference burn!).

Suffice to say, licensed books have their place. There’s been great examples of those who made great leaps of fiction balancing the properties’ beats while adding to the canon. John Ostrander’s run on Star Wars is still sold out at my local shop. And Joss Whedon’s continuation of the Buffy: The Vampire Slayer into a “9th season” via comics helped fans continue their love affair with the series. There is a place for these books, indeed. The fact is unless you yourself are a die-hard lover of the property in question, the book is wasted space on the rack. And for someone who is now actively seeking originality at the shop… no amount of lightsaber fun will turn me toward the dark side. Simply put? A licensed book is a license to limit your sales to those who are familiar. Everyone else? Find some place else to read.

I would like to note that if the powers that be would like to license Exo-Squad to Unshaven Comics, I will voluntarily lop off my left leg, and then proceed to write and draw the best damned Exo-Squad comic is history. And I can guarantee that it’ll be a top seller… to the 40 or so people who still love the property.