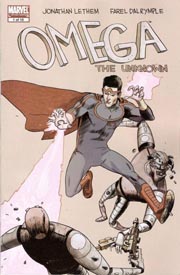 For a while now, I’ve been thinking that maybe Jonathan Lethem is the best writer of his generation. What prevents me from just coming out with it… Dammit, Lethem is the king! – is that I haven’t read many other writers of Lethem’s (and my son’s) generation. Maybe the Elvis Presley of prosemeisters is lurking out there someplace, with a birthday that puts him somewhere between 40 and 50, and I just haven’t heard of him. So let me be content with stating the obvious, that Lethem does his job well.

He writes novels and essays and, lately, comic books. But what I want to call your attention to and, incidentally, dub this week’s Recommended Reading, is his op-ed piece in last Sunday’s New York Times. It discusses the latest Batman movie and relates the film to what’s happening in our tortured nation. It’s a pretty gloomy bit of superb writing. But how could it not be gloomy? I said it was about what’s happening to the good old U. S. of A., didn’t I? Where could cheer come from? Maybe Johnny Mac’s flacks?

Yeah, the market imploded and some of it received a bailout from the Feds and who will eventually foot the bill? Ol’ tax payin’ you and me, that’s who. But that’s not what’s eating my lunch. I mean… economics! Finance! Who understands that stuff? Certainly not me. (I used to think that those boring old guys in suits, whose job it is to understand that stuff, did, in fact, understand it. Guess not, though.) But what bothers me for the next five minutes, or until I see another newspaper or watch CNN some more, is that according to one poll, 54 percent of the pollees think Sarah Palin is qualified to be president.

This gives me sadness, and a profound feeling of alienation, because nothing in Ms. Palin’s record, nor anything I’m aware she’s said since being anointed Johnny Mac’s running mate, indicates that she is even qualified for the governance jobs she’s already had, much less the biggest of the big leagues, and I wonder what they’re seeing that I’m not, my fellow Americans. Or do they want a leader who apparently believes the First Amendment has no more importance than the slip of paper in a fortune cookie? That denies the validity of evolution? That thinks the current military debacle is a mission from God… ? No point in continuing the catalogue… If my fellows know of these things and they don’t care about them, then the system is broken. If they don’t know… well. how could they not?

A lot of us where pretty mad during the Viet Nam war, but optimism was possible. We thought, If only we can get past the current ignorance, sanity and mankind’s capacity for good will prevail. We got past it, all right, and now we’re in a world where the venal and corrupt hardly even bother to pretend that they want anything more than more… primarily, more money and more power because that’s what they’re talking about when they talk about “a permanent Republican majority”: power. And we put those guys in office twice, and there’s a possibility that we’ll next put into office a crew who are just as venal and may be, Lord help us, even less competent.

It would not be appropriate to end this dour column on any kind of sunny note, but at least let me class it up with a quote from Thomas Jefferson: “I tremble for my country when I reflect that God is just.”

Dennis O’Neil is an award-winning editor and writer of Batman, The Question, Iron Man, Green Lantern, Green Arrow, and The Shadow– among others – as well as many novels, stories and articles. The Question: Epitaph For A Hero, reprinting the third six issues of his classic series with artists Denys Cowan and Rick Magyar, will be on sale in September, and his novelization of the movie The Dark Knight is on sale right now. He’ll be taking another shot at the ol’ Bat in an upcoming story-arc, too.