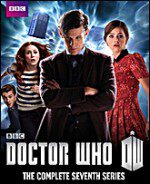 There were certainly enough twists and turns in the latest series of Doctor Who to warrant a re-viewing, and not that The Complete Seventh Series is out on DVD and Blu-Ray, you’ve got your chance. The Fall of the Ponds, The Impossible Girl, and one hell of a cliffhanger, all packed up in one nice little package.

The box features all 13 episodes of the series, including all the prequels, as well as the five-part mini-series “Pond Life”  There’s also three new mini-sodes featuring The Doctor working on his chore to delete himself from the databanks of the world, he and River Song in one of their various unseen adventures, and Clara having a heart-to-heart with the TARDIS.

After a change in heart, it also features both Christmas episodes, Jenna Coleman‘s first (official) episode The Snowmen as well as the previous year’s The Doctor, The Widow and the Wardrobe. Commentaries are only included for selected episodes, and while the beloved Doctor Who Confidential is no longer a thing, they’ve added in the brief making of features they posted on the BBC Website. They’ve pulled the cast interview’s from BBC America‘s The Nerdist as well. Longer making of features cover Karen and Arthur’s last day on set, a more in-depth piece on The Gunslinger, and Creating Clara.

A series of specials round out the set, including The Science of Doctor Who as seen on BBC America, as well specials on The Companions, Doctor Who at Comic-Con and more on The Doctor’s adventures in America, both on screen and behind it.

Another winner of a set, equal in quality to the sets for the previous series. This’ll easily keep you busy till the anniversary special come November 23rd.

And in case you don’t already have the past sets, they’ve updated the complete box set to include the seventh series, and included the Sonic Screwdriver universal remote control of which you may have heard.  So, good opportunity to buy the love of your favorite Whovian for the rest of their life.