Review: Out of Picture, Vol. 2 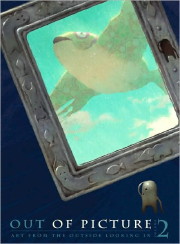 No one will admit to editing [[[Out of Picture 2]]], though they seem to be proud of it – buried deep on the copyright page is the “produced by” credit I’ve pulled out for the bibliographic information above, but that doesn’t necessarily mean those were the editors. Ah, well – someone was in charge of this book, even if we’re not sure who that was.

Out of Picture 2 is the second book from a group of animators and illustrators connected to Blue Sky Studios – the first Out of Picture was published by a French house, caused a stir at some conventions, and was reprinted by Villard in December. (And I reviewed it then.) Basically the same crew is back for this volume, though they don’t all work at Blue Sky anymore.

And I see, looking back at my review of Out of Picture 1, that it was a gorgeous book, but a bit lacking in the story department – somewhat obvious and clichéd. I’m sorry to say that Out of Picture 2 is the same kind of thing – amazing art, reproduced fantastically well on large pages of nice paper…but telling stories that aren’t all that special.

This time, we open with Jason Sadler’s wordless “[[[Sub Plotter]]],” a cute little story about the effects of sneezing on a gigantic war-map of an ocean. It seems to be set during WWII, and it’s quite visually inventive, using the space of the large pages very well and popping up with more insets than I would have thought possible. But the story told is a silly little vignette, and, even more so, it’s a vignette that would probably be better animated than in its current form.

Next is Benoit Le Pennec’s “[[[The Youth of Jimmy]]],” a classic Western movie that turns into something more meta along the way – it doesn’t entirely make sense, but it does have some ambition to it, so I salute that.

And then there’s another wordless story from Kyle MacNaughton, which, again, is gorgeous but looks like the storyboards for the opening of a movie that will eventually have to explain those images. But, on the page, there is no explanation, and no ending.

Jake Parker’s “[[[The Antler Boy]]]” does tell a story – a fireside tale to children – and Andrea Blasich’s “[[[Are You the Right Color?]]]” continues the trend in which every other story is wordless. Both are sweet stories that seem to be aimed at children, and teach Important Lessons.

“[[[Crawdaddyo]]]” is a comic romp by Lizetta Vega about some hungry crocodiles and the ever-larger crayfish they chase; it feels like the proof-of-concept for what would be a very fun animated short.

“[[[A Dream of Kyosuke]]]” by Daisuke “Dice” Tsutsumi tells the story of a bioengineered warrior after the war – he’s a simple, loving soul, who only wants to be left alone to be a farmer, as in all the permutations of this common anti-war story that are aimed at children – who comes to grief.

But Vincent Nguyen’s “[[[The Carnivore]]]” mixes things up slightly; it’s one of those stories about kids and monsters in which the kid is nastier than the monster can handle. It, too, is completely appropriate for kids.

After that, there’s a supposedly autobiographical piece by Willie Real about a boy who goes fishing off the wing of a flying airplane, a disjointed, possible allegorical piece by David Gordon in which various furries ponder what was “the beginning of the end,” and a long, oversweet, sepia-toned story of a sad gargoyle by Mash Dunnigan.

Then there’s another wordless strip – also another story about a kid having swell adventures – by Sang Jun Lee. And Michael Knapp’s “[[[Under Pressure]]]” is the kind of ecological fable that only twelve-year-olds can stomach. Last is Peter Nguyen’s “[[[The Missive]]],” the story of a letter that needs to be delivered through great danger to save one little girl.

After that is a forty-page “[[[Development gallery]]]” (read: sketchbook) and biographies of the creators. There’s a nice group drawing of all of them across the top of that page, except…there’s no key to which drawing goes with which artist – they’re clearly not in the same order as the biographies. So it’s pretty, but not all that useful.

Out of Picture 2 has some absolutely stunning art – all of these folks are damn good, and they have a wide variety of styles. But the stories are simpler and more juvenile than they need to be. For Out of Picture 3, I’d suggest they go over to whoever’s doing the screenplays at Blue Sky, and see if they can’t get some real writers involved in this project. What’s here is OK, but the writing is vastly inferior to the art—though I should add that art is absolutely amazing.