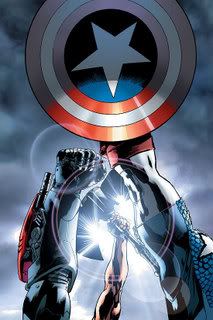 Things have been pretty slow lately in Marvel’s Ultimate Universe, but big changes are in the works with the event Ultimatum on the horizon.

After the dust clears on that — whatever it is — writer Mark Millar has announced he’s returning to the Ultimate Universe, though it’s likely not to write The Ultimates, the series he made famous through two "seasons."

CBR talked to Millar about the project, though he couldn’t reveal much:

The United States will serve as the primary setting for Millar’s new Ultimate title. "I think anything set outside of America everybody always hates [Laughs]," the writer said. "And I say this as someone from outside of America. Even I feel slightly depressed when I see something set in Europe. So it’s going to be very America centric. Like most adventure stories it will move around the world at times but I like the top ten list too much to set something outside of America."

America may be the primary setting of his new title ,but Millar plans to use the series to expand the Ultimate Universe by introducing many new characters and concepts. "Part of the fun is building up our own Marvel Universe, because if you think about it, Marvel has had almost 50 years to create a world. But if you add up all the ‘Ultimate’ comics, like Spider-Man and Fantastic Four and the various mini-series, you don’t have 300 issues. So, there is an untapped world and I think that’s a lot of fun to play with. Like in ‘The Ultimates,’ I created a European team and you’ve been given glimpses of what’s going on in Russia. There’s still a lot we haven’t tapped into, like China. So I’d never focus an entire story on that type of thing but it’s fun to bring that stuff into it."

Marvel also held an Ultimate panel, which you can read about right here.